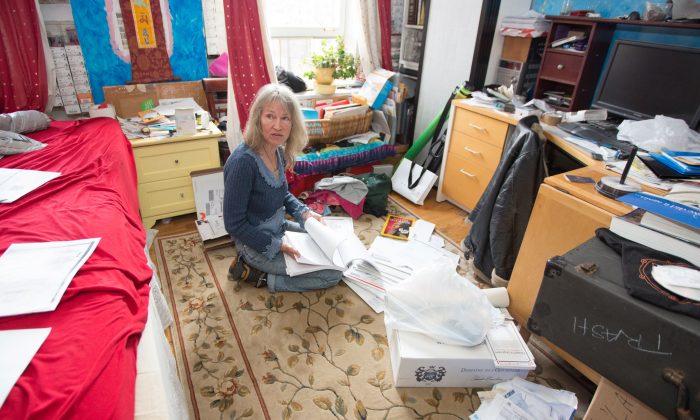 Paula Gloria Tsaconas Barton sifting through court documents and letters in her Gramercy Park South co-op studio, June 11, 2014. Last year, while she was travelling, Tsaconas Barton got notice her apartment had been sold to someone else and is now facing eviction. (Laura Cooksey/Epoch Times)
New York

NEW YORK—Paula Gloria Tsaconas Barton lives in a co-op on the edge of Gramercy Park in Manhattan, the patch of nature that helped turn her life around when she landed in New York 16 years ago with an impending divorce. Now she and her second husband Joe Barton are afraid they will be evicted.

Tsaconas Barton sits down in front of the presiding judge and asks if she can make her own recording of the hearing. Last time she was in court, she said, the audio she received afterward was incomplete.

The judge drops the papers and holds up her hands and declares, “Decision reserved.” She said she doesn’t have time for this today, dismisses the group, and said she’ll review the paperwork and make her decision later.

Barton protests; her landlord’s attorney presses her mouth into a line and slowly collects her things before making a beeline for the door.

The clerk calls up the next group from the waiting section where every seat is taken.

Radin wears a bright yellow button reading “court support” and is in housing court several times a month, answering questions, helping with paperwork, and letting tenants know what they can and can’t do to get the law on their side. She is not a lawyer, and does not work for the courts. On Radin’s advice, Tsaconas Barton tried to file a complaint to the supervising judge.

Radin had been a resident of New Jersey, until she was evicted a few years ago and has been living in Brooklyn since.

Often a tenant’s last line of defense against eviction is housing court—puzzling, gargantuan, and grueling—with a series of procedures they navigate alone.

Along the way, many attorneys say, unrepresented tenants are almost always waiving rights here and there that they didn’t know they had. Papers need to be served a certain way, there are specific numbers of days required for specific notices, and the opposing attorney’s seemingly innocent questions are probably binding. The tenants, often low-income, cannot afford attorneys, and now legislators and courts are trying to hand renters more tools to secure their right to housing.

“All the tenants, we all know we’re on the right side of the law, but now we have to fight the court system,” Radin said.

Over 90 percent of landlords go to court represented by an attorney, while the tenant is usually without. The courts have recognized this problem, and earlier this year Jonathan Lippman, chief judge of the New York Court of Appeals, announced a pilot program where non-lawyer “court navigators” are allowed to accompany litigants, provide informational assistance, and answer the judges’ questions.

“It’s an idea that’s been exploding around the country,” said Justice Fern Fisher, deputy chief administrative judge for New York City courts, who has worked on the project. “There’s a serious justice gap in the whole country.”

Some of the navigators are volunteers, typically housing advocates, and the majority are university students recruited by the courts. They undergo a training program but are not lawyers and cannot give legal advice.

“It’s been very helpful for people going into housing court, for people who are in crisis,” Fisher said. “They need someone to hold their hand.”

But in many cases that’s not enough.

Radin remembers an instance where an 80-year-old woman living in her building in Brooklyn was two days away from being evicted, and didn’t know a thing about the paperwork involved. Radin had to run to court to rectify the procedure, granting her neighbor enough time to properly appeal.

Having fought her own battles in court, Radin was aware of the tricks and nuanced details, but most people are not and may be lost without a lawyer.

And Radin is tired. When she walks into Brooklyn Housing Court, tenants are always handing her their names, phone numbers, asking for help. It started with her neighbors but has spread through word of mouth and “now it’s overwhelming,” she said. She doesn’t have enough hours in the day to help everyone and live her life, but when she hears the terrible stories each person has, she wants to empower them.

Over 200,000 New Yorkers were served with eviction papers last year, resulting in 30,000 evictions. Two-thirds had incomes under $25,000, and the same amount had children under the age of 18.

On Wednesday, Council members Mark Levine and Vanessa Gibson introduced a bill to provide legal counsel for those making less than 125 percent of the federal poverty level and are subject to eviction, ejectment, or foreclosure proceedings.

“The lopsided nature of housing court in New York City violates any reasonable definition of justice,” Levine said. The progressive administration has taken to tackling the city’s dramatic housing crisis, which includes preserving 120,000 of the affordable units that are lost in bulk every year through evictions.

It’s an effort Radin has worked on herself. She moved into Jersey City before it was an up-and-coming neighborhood, and her landlord had been just a friendly neighbor then.

But around 2005, he brought her to court for a seemingly small reason, trying to evict her. Radin brought an attorney and won. Then it happened again. “He kept bringing me to court for frivolous actions,” Radin said, for things like allegations of her not paying a month’s rent. It escalated to the point where she was getting death threats. “All because a neighborhood got popular.”

By about 2007, everyone else living in her building when Radin moved in had left. It dragged on for years, and Radin kept winning, but she was losing in attorney’s fees, and couldn’t afford to fight anymore.

She eventually moved to Brooklyn, but found in New York law that tenants have a right to recover attorney fees when they win, just as landlords do. She brought the law to New Jersey, and earlier this year, bill S2018 was signed into law. It is now printed in bold in tenants’ leases.

But then in New York, she realized clerks were telling tenants they had waived their rights to recover attorneys fees for reasons neither here nor there, and now she is working to have that right clearly stated in leases here.

“There is still a need for more lawyers in the system,” Judge Fisher said. Pro bono lawyers are swamped, and as many as 60 organizations providing legal services and 32 council members have signed on to support the City Council’s right to counsel legislation.

Radin is primarily an advocate for education. She attends the Housing Clinic started by Manhattan Borough President and then-Council member Gale Brewer on the Upper West Side every month, and encourages tenants and organizations to do the same.

“Most people are too scared to stand up,” Radin said. When Radin met Tsaconas Barton and found out she had been sent an eviction notice on the grounds of a nonjudicial foreclosure, which rarely occurs in New York state as it is only allowed when a power of sale clause is written into the deed of trust or mortgage. Tsaconas Barton said the allegation is not true and there is fraud involved, so she is appealing her case.

“As soon as you understand, it’s not so scary,” Radin said. “It’s empowering, and you should teach people to fight your own life, so they can be an independent person.”