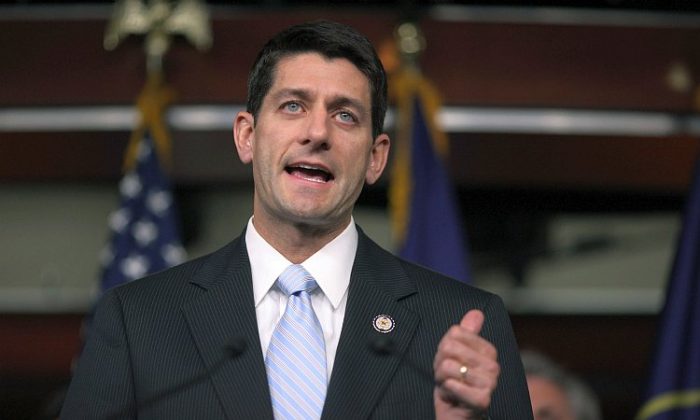 House Budget Committee Chairman Paul Ryan (R-Wis.) speaks during a debt-ceiling legislation news conference in Washington in August. Best known for his deficit reduction "Ryan Plan," the congressman was one of four House Republicans who did not vote in support of a balanced budget amendment to the Constitution. (Chip Somodevilla/Getty Images)
US

WASHINGTON—A vote on a balanced-budget amendment to the U.S. Constitution failed in the House of Representatives on Friday, with the bill’s supporters—primarily Republican congressmen—failing to garner the two-thirds majority necessary to pass the measure. The final tally was 261–165, falling well short of the 290 votes necessary to pass the measure.

The vote on the measure, which was titled H.J. Res. 2, marked the first time in 16 years that the House has voted on a balanced-budget amendment. During the Clinton presidency in 1995, a nearly identical bill passed the House with overwhelming bipartisan support.

This time, however, that bipartisanship was harder to come by. Only a total of 25 Democrats—so-called conservative Blue Dog Democrats—voted in favor of the measure. Four Republicans—Reps. Justin Amash (R-Mich.), David Dreier (R-Calif.), Louie Gohmert (R-Texas), and Paul Ryan (R-Wis.)—joined House Democrats in voting against the bill.

Ryan, who is chairman of the House Budget Committee and a staunch fiscal conservative best known for his 2011 budget proposal nicknamed the “Ryan Plan,” said in a statement that his opposition to the bill was due to his belief that the bill was not stringent enough and would lead to larger government.

The Friday vote was called for as part of the “Cut, Cap, and Balance Act of 2011,” a bill passed by the House during the debt-ceiling debate over the summer.

Some provisions of the bill included:

• Total outlays shall not exceed total receipts in any fiscal year.
• Three-fifths majority of both chambers is required to raise the debt ceiling.
• The president must submit to Congress each fiscal year a budget in which outlays do not exceed receipts.
• A majority of both chambers is required to pass any bill that increases revenue.
• Congress may waive the provisions of the bill, through a simple majority in both chambers, if a declaration of war is in effect, or if there is a serious threat to national security.
• Such a constitutional amendment would go into effect five years after it is ratified.

Republicans in favor of a balanced-budget amendment to the Constitution argue that such a mechanism is necessary because the federal government cannot be trusted to spend within its means. They also point out that state governments are required to balance their budgets, and believe that the federal debt and deficit act as a drag on national economic growth.

“It is a simple concept—you can’t spend more than you take in. Business owners, individuals and families all across this country understand this concept and live by it in their own lives,” said Rep. Bob Goodlatte (R-Va.), the bill’s primary sponsor, in a statement released after the failed vote.

“They should expect nothing less from the federal government and yet Congress continues to prove it cannot make the tough decisions on its own. We must rein in the skyrocketing deficit spending that is discouraging investment and threatening to bankrupt our nation.”

Meanwhile, many Democrats believe that a constitutional amendment is not required to balance the budget, pointing to four balanced budgets during the Clinton administration as an example. They also argue that the implementation of such an amendment would have disastrous consequences for the economy in addition to cutting back social programs such as Medicare, Medicaid, and Social Security.

“Many of those same Republican members, who saw nothing wrong with busting the budget, who sat quietly when Vice President Cheney said that deficits don’t matter, now demand this assault on our founding document instead of delivering the votes for sound fiscal policy,” said Nadler.

House Minority Whip Steny Hoyer (D-Md.) who supported a balanced-budget amendment during the 1995 vote, voted against the bill on Friday, stating, “Events in the last 16 years lead me to oppose today’s balanced budget amendment.”

Hoyer argued that under Clinton’s four balanced budgets, Congress “didn’t need an amendment. We needed the will and the courage.”

House Rules Committee Chairman David Dreier, one of the Republicans who voted against the bill, agreed, saying that during the 1990s “we were able to balance the federal budget without touching that inspired document: the U.S. Constitution.”