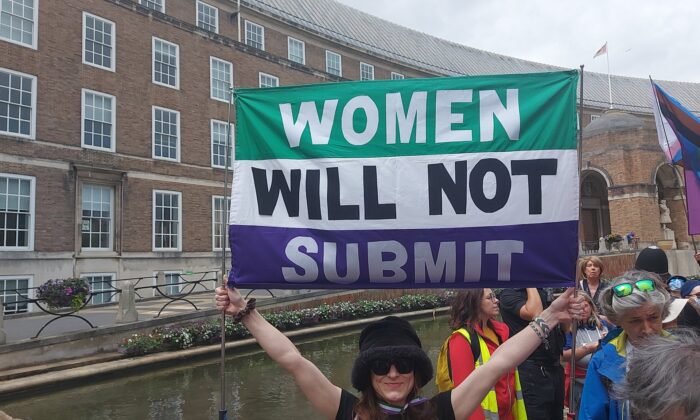 A woman holding a "Women will not submit" banner in Bristol, England, on June 19, 2022. (Courtesy of Standing For Women)
UK

A feminist group in Bristol, England, was threatened by a group of trans activists and anarchists on Sunday, with the group refuting claims made by Avon and Somerset Police that there was bad behaviour on “both sides.”

On June 19, the Standing For Women group organised an event on women’s rights for its Speakers’ Corner tour at Bristol’s College Green.

Its organiser said that “the male aggression and intimidation women experienced in Bristol was revolting. Women were told to die, get in the sea, by threatening men in masks” and added that “no other group of people would be expected to bow so submissively to the whims of threatening aggressors.”

Standing For Women says its focus is “specifically on the word ‘woman’ and other female language that clearly defines women and our rights.”

Standing for Women organiser and women’s rights campaigner Kellie-Jay Keen, who also goes by the name Posie Parker, released a statement saying that it was “an event aimed at combatting the silencing of women’s voices on the erasure of our rights, our spaces, and our language posed by the totalitarian transgender promoting ideologues.”

“Our attendees are peaceful law-abiding concerned citizens, they are mostly women. We invite ordinary women to speak, we are a broad church. Standing For Women is apolitical, all women are welcome. We even fight for the rights of women who disagree with us,” she added.

A counter-protest was organised by the far-left Anarchist Federation, which describes itself as “anarchist communists and revolutionary class struggle anarchists, and operate[s] as a membership organisation.”

“Bristol is a city where 99 percent of the feminist, queer, left, and anarchist movements and squarely in favour of trans rights. Here is hoping they all turn out, and the 1 percent stay home,” it wrote before the protest on Facebook.

In the footage, balaclava-clad men in black scream “trans rights are human rights” in the faces of the women, while pushing past police in an attempt to shut down the protest. They also tell the women they would “die out.”

Bristol, England: Today, #Antifa members from the Anarchist Federation & other far-left extremists gathered to try & shut down a women’s rights gathering. The feminists were accused of being transphobic fascists & required police protection.pic.twitter.com/v2Mx6nkBGt

‘TERFS Are Not Welcome Here’

The trans activists also carried placards with highly sexualised insults. They also wrote in chalk “Terfs are facists,” “Sex workers for trans rights,” and “After, Colston TERFs are next.”

A group called Bristol Against Hate wrote on Twitter after the protest: “The group was clearly outnumbered and spent most of the day surrounded and drowned out. Bristol made it clear that TERFS are not welcome here.”

“TERF” is a controversial term meaning “trans-exclusionary radical feminist.” “Colston” is a reference to the bronze memorial to the 17th-century merchant Edward Colston, which was pulled down from its plinth during a Black Lives Matter protest in Bristol in 2020 by activists in the wake of the murder of George Floyd in the United States.

The women were eventually forced to barricade themselves inside The Slug and Lettuce pub, accompanied by police.

Keen said that women “were asked by the police to go home, rather than enjoy refreshments in a bar we had hired” and that the policing in Bristol was “inadequate and dangerous.”

Bad Behaviour on ‘Both Sides’

Avon and Somerset Police released a statement saying that they had “facilitated around 150 peoples’ right to protest in Bristol City Centre.”

“Two groups with differing views gathered at College Green at 1 p.m. and specialist police liaison officers regularly engaged with both throughout the afternoon,” police said.

They added that at one point, officers formed a line between protesters in order to “keep them apart and maintain order.”

“While both groups at times raised their voices, there were no psychical confrontations. The right to protest is a fundamental democratic right and we are pleased to have been able to facilitate both these demonstrations,” police wrote.

“We refute the claims made by some media and the Avon and Somerset police that there was bad behaviour on ‘both sides,'” said Kellie-Jay Keen.

“Aggressive and threatening men, on the MRA/TRA side, were very close to our wardens and attendees. They shouted obscenities in the faces of women and they tried to push through the police line, there were physical confrontations by men in masks,” she said.

She added that Standing For Women will be asking Chief Constable Sarah Crew, PCC Mark Shelford, Mayor Marvin Rees, and Minister of State for Crime and Policing Kit Malthouse to examine footage “to see how better to protect women at public events.”

The Epoch Times has contacted Avon and Somerset Police about Standing For Women’s comments.