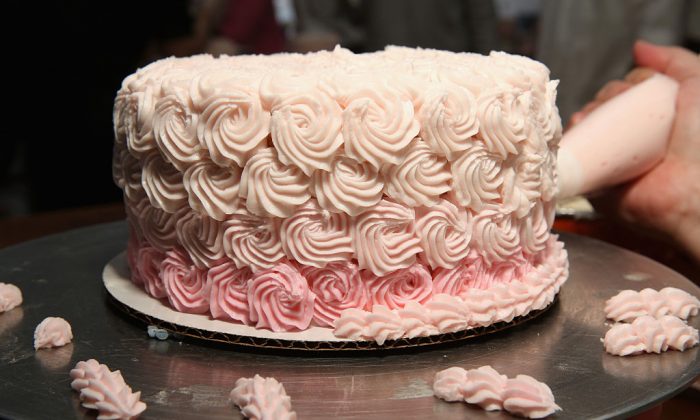 Cake on display. (Photo by Cindy Ord/Getty Images for NYCWFF)
US

The Colorado baker who refused to custom-make a cake for a gay wedding couple has been helped along by support from the Department of Justice.

The DOJ issued an amicus brief in support of Jack C. Phillips ahead of the supreme court case, the Independent Journal Review reported. An amicus brief is simply a friend-of-the-court legal recommendation of additional information to keep in mind, according to Public Health Law Center.

The amicus brief discusses how Phillips sees making cakes as a form of art and spiritual expression, and so the First Amendment needs to be taken into account. The brief goes into how many aspects of the business incorporate the owner’s Christian beliefs, not just the cake making. The shop is closed on Sundays, does not incorporate alcohol into its products, and does not sell any Halloween-related goods.

“When Phillips designs and creates a custom wedding cake for a specific couple and a specific wedding, he plays an active role in enabling that ritual, and he associates himself with the celebratory message conveyed,” states the amicus brief.

Back in 2012, before gay marriage was legal in Colorado, Masterpiece Cakeshop owner Phillips did not refuse service to Charlie Craig and David Mullins. He didn’t say they couldn’t purchase any of the ready-made goods already in stock or other kinds of custom-made items, but he refused to create a custom wedding cake celebrating a same-sex marriage for their wedding party.

Craig and Mullins at the time planned to go to Massachusetts to get married, where it was legally possible. Colorado had not recognized same-sex marriages or civil unions until 2014. After the refusal, the couple obtained a wedding cake from another bakery that they used at the reception.

Craig and Mullins filed a discrimination case. Colorado’s public accommodations law was used as the basis. In the lower courts a judge recognized that the courts could not “compel an individual to communicate by word or deed an unwanted message or expression” but the case still went in favor of the gay couple.

The case was taken to the Supreme Court after the lower courts sided with Craig and Mullins, stating that the cake should have been made. Phillips made the case back then that it was a violation of his religious beliefs, and the rights thereof guaranteed in the Constitution, to make the cake.

The courts instructed him to treat gay customers the same and give staff training, and issue quarterly compliance reports. Phillips closed the cake part of his business in response, sacrificing a large percentage of his revenue. The courts refused Phillips’s petition that his First Amendment rights were at issue.

The core of the case deals with the Free Exercise clause of the First Amendment versus Colorado’s public accommodations law. At the level of the lower courts Phillips was continually defeated. But the amicus brief demonstrates that hope for his case still rests in the highest courts of the country. Observers believe the case will put First Amendment rights to the test and that the outcome could play favorably for First Amendment protections under the influence of President Donald Trump’s administration.

Acting Solicitor General Jeff Wall also made the following statements in the brief:

“Forcing Phillips to create expression for and participate in a ceremony that violates his sincerely held religious beliefs invades his First Amendment rights.”