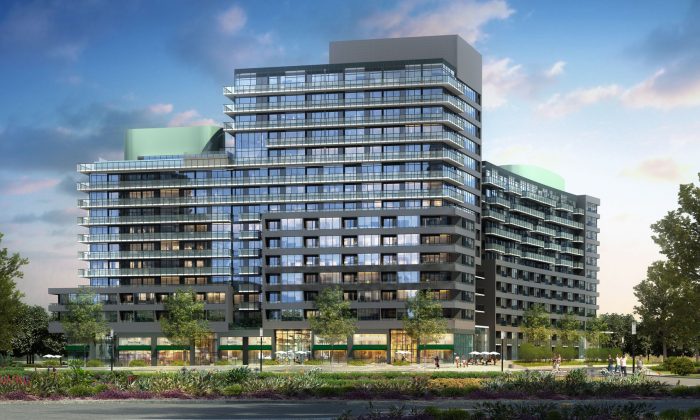 Rendering of Canary Park Condominiums. Canary District will catch the eyes of the world as it transitions from a home for athletes of the 2015 Pan American Games into a celebration of life and nature, family and community. (Baker Real Estate Inc.)
Canadian Content

The success of the GTA condo market over the past decade has been driven in large part by investors, and builders have catered to this key buyer group with a steady supply of lower-priced, smaller units ideal for renting out.

But Baker Real Estate Inc. vice-president Harley Nakelsky tells Epoch Times that a number of new projects are proving popular with end users—first-time purchasers, right-sizing buyers, or young families who plan on living in the units themselves.

That’s the case at Canary District, formerly the Pan Am Games athletes’ village, where suites at the first two residential buildings are occupying this spring, alongside the launch of a third tower. While the district has seen considerable investor interest, Nakelsky notes it’s also drawing end users in droves.

“People like the fact that they’ll be moving into a brand new master-planned community,” he explains, pointing to the new YMCA and 18-acre park, Corktown Common—which serves as a trailhead to path networks up the Don Valley and along the lake—as well as Canary District’s soon to be up-and-running retail, including Sukhothai and Dark Horse Espresso Bar and OpusGlow, Think Fitness Studio and The Running Room.

The community’s two- and three-bedroom units and townhomes are attracting families, and Nakelsky says his team recently sold a condo to a father who subsequently bought a second one for his daughter, “so they could both live in the same building.”

He anticipates end users will also flock to Clarkson Village, a stacked-townhouse project launching later this year by Haven Developments at Bromsgrove and Southdown roads in Mississauga. The development is close to schools, parks and walking trails, and, perhaps most important, is well-served by transit.

“It’s right by Clarkson GO station,” Nakelsky says. “So people can get in and out of the city with ease, but they’re not paying city prices.”

Stacked townhouses are on the rise across the GTA. They’re an alternative for those who can’t afford detached or semi-detached homes but have no desire to locate in a condo tower, either. “Some people don’t like the idea of high-rise living, with corridors, elevators, and being amongst all those other neighbours,” says Nakelsky. “They want to feel like they’re in a house: walk in and out their front door. And they don’t want to pay high condo fees.”

Stacked townhouse buyers like that the projects can be built out faster, and are therefore ready to move into sooner, versus condo towers that can take three to four years to complete, a timeline that tends to make pre-construction purchases untenable for the average buyer. And because stacked towns make more efficient use of the land they sit on, units are generally cheaper. They have lower fees than condo towers, too. “Plus you have your own front door,” Nakelsky says.

Riverside Square, a new mixed-use community by Streetcar Developments planned for the south side of Queen Street East—between Broadview Avenue and the Don Valley Parkway—is luring loads of end users. The project will ultimately have 900 units in five buildings, and retail such as a grocery store, restaurants and cafes, and building amenities including a rooftop pool, party room and large fitness centre. “Stuff that doesn’t really exist in that neighbourhood right now,” Nakelsky notes.

End users are keen on Riverside Square because it enables them to locate close to Leslieville and on the east end of town, but it’s also mere minutes from the DVP and the city centre. The first three buildings at Riverside Square sold out, nearly 700 units. “We’ve done very well,” says Nakelsky, “and a lot of that’s been end users buying.”

He anticipates it’ll be the same situation at 75 The Esplanade, a 34-storey tower by Harhay Developments and Carttera Private Equities launching later this year at the southwest corner of Church Street and The Esplanade. The development is situated in Toronto’s oldest neighbourhood, and a stone’s throw from some of the city’s best restaurants and shopping, not to mention the ultimate transit hub: Union Station. “A lot of end users will be interested in this project,” Nakelsky predicts. “It’s right in the middle of everything.”