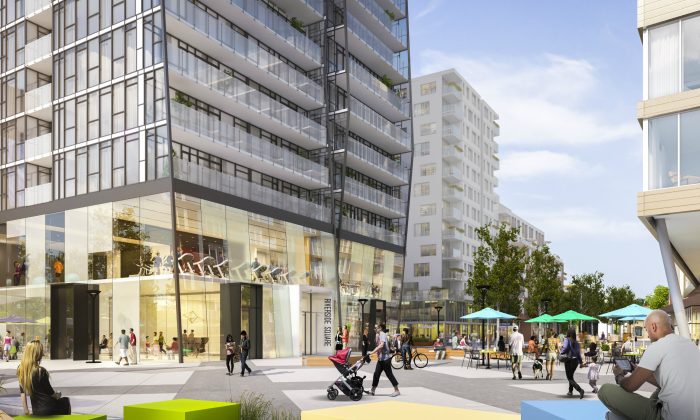 Baker: 905 Will be One of This Summer’s Condo Hotspots

“We’re selling up a storm,” president Barbara Lawlor tells Epoch Times in an interview at the brokerage’s Bloor Street East offices. “We’re ahead of last year, in fact—and the year before that.”

Much of the momentum has been in the 905, says Lawlor, a region that is “taking its place in the GTA’s new-condo construction industry,” Vaughan and Markham in particular. “A few years ago they were bedroom communities. Not anymore.”

The 905 has become a “magic number” for a host of reasons, she points out. Most of all, real estate in the region is more affordable than downtown (up to 30 percent cheaper). And transit service in the ‘burbs’ has been improving by leaps and bounds, notably the Toronto-York-Spadina subway extension to York University (opening 2017), with stops along the way at Vaughan Metropolitan Centre (VMC).

The VMC, a new downtown for Vaughan where none existed before, will be anchored by a 100-acre mega-project developed by SmartREIT that’ll include 16 million square feet of residential, office and commercial space.

This spring Baker launches Cosmos Condos, a 35-storey, twin-tower project at Highway 7 and Jane Street, in the heart of the VMC. Cosmos is the first phase of a master-planned community by Liberty Development that will ultimately include 1,300 residential units and an office tower. “It will be 300 metres from the subway entrance,” Lawlor says, and it’ll take nine minutes to get to York U and 45 minutes to downtown. “That’s far better than commuting by car.”

While Vaughan is making big strides, Markham is even farther ahead on the city-centre creation front. When Baker first started selling real estate for The Remington Group’s extensive Downtown Markham master-plan development—10,000 condos and townhouses and 2 million square feet of retail at full build-out—there was nothing more than a presentation centre in an open field. “Now we’re on our 14th building,” Lawlor says.

The latest, York Condos, a 15-storey building, will be a stone’s throw from York University’s new satellite campus in Downtown Markham, and on the doorstep of a 243-acre urban centre with a 2,400-seat Cineplex VIP cinema, boutique Marriott hotel, and North America’s largest urban park, Rouge Park. This summer Baker launches the townhouse component at York Condos, a collection of 24, two-storey units with patios, many offering access to the park.

Townhouses are now all the rage—in the 905 and beyond—as house-hunters seek affordable detached-home alternatives that aren’t located in a high-rise condo tower. Baker vice-president Harley Nakelsky says buyers also like that townhouses come with lower maintenance fees than condos, and that they’re larger units with their own front door.

That’s the case with townhouses at The Taylor, a new mid-rise condo community by Streetcar Developments at Carlaw and Dundas streets. “They give people the low-rise feeling,” says Nakelsky, “but they’re buying a house in a development that gives them amenities, an underground garage, and the landscape taken care of.”

Townhouses also will be a big draw at Clarkson Village, a project Baker launches this fall in Mississauga. Situated adjacent to Clarkson GO station, the stacked townhouse enclave will have easy access to downtown Toronto, Nakelsky said, “but you won’t be paying downtown Toronto prices.”

Vibrant Condos, coming this fall from City Developments at Sheppard and Warden Aves, will have a townhouse component, too. And Opal Urban Towns, a project by Time Development Group launching soon at Markham and Kingston roads, will boast 140 stacked towns, “which I think will fly out the door,” says Nakelsky.

Baker’s sales slate is chock-full throughout 2016, with a new building being launched at Riverside Square, a mixed-use development by Streetcar planned for the south side of Queen Street East between Broadview Avenue and the Don Valley Parkway (the first three phases sold out, nearly 700 units); and another building at Canary District, the former Pan Am Games athletes’ village that’s been transformed into a mixed-use community (new retail just opened along an extended Front Street East, the district’s main artery).

And buzz is building for 75 The Esplanade, a 34-storey tower by Harhay Developments and Carttera Private Equities that Baker will launch later this year at the corner of Church Street and The Esplanade. “We’ve been getting lots of calls and registrations,” Nakelsky says. “It’ll be a big one.”

All the projects are helping bolster Toronto’s standing as a preferred destination for real estate investment, whether it’s domestic, or, thanks to a low loonie, increasingly from overseas. “There’s a new level of foreign investment in our condo market,” says Lawlor, noting Baker has long had sales offices in Hong Kong and Singapore to serve Asian investors, and it just opened one in Shanghai.

It’s easy to understand Toronto’s appeal, Lawlor says. On top of its bargain real estate prices (at least from a global perspective), the city is also one of the most multicultural in the world, with 140 languages and dialects spoken. Toronto’s got a variety of leading post-secondary education institutions, a big draw for Asian buyers. And the city was just voted among the safest on the planet by Places Rated Almanac. “All of this is making investors feel confident about buying new-construction condos in Toronto.”