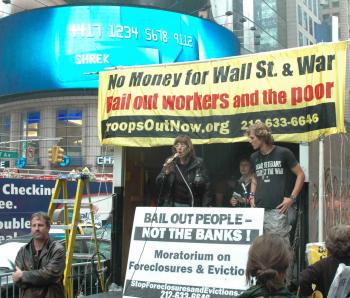 “Bail out people, not banks!” reads literature the groups handed out. “Money for human needs, not war and corporate greed!”

One demonstrator, Mr. Bob Parson’s said, “This is not going to be solved through any presidential election, it is up to the people up to us to bring this whole fascist direction to a halt.” Both presidential candidates, Sen. John McCain and Sen. Barack Obama, have suggested that an agreement to carry out the enormous bailout would be forthcoming.

While it’s nothing new for anti-war demonstrators to protest President George Bush’s policies, it is surprising that the anti-war demonstrators at Times Square Saturday would find themselves sharing ranks with many far-right conservatives who also oppose the federal government’s use of taxpayers money to bail out private companies.

“This nation was … built on individualism as far as profit and responsibility. And with us bailing these banks out we're … saying any time you get into trouble we're going to come bail you out," said conservative talk show host Mr. Rush Limbaugh on Friday, as reported by Reuters.

“We’re told there’s no money for health care, education, infrastructure, but in one swoop, $1 trillion has been found to prop up banks and financial institutions. This money has been stolen from working people,” reads a flyer from the anti-war groups.

As of Saturday night, an agreement between Republicans and Democrats over the bailout plan looked eminent, with Speaker of the House Nancy Pelosi confirming that an agreement should be reached by Sunday.