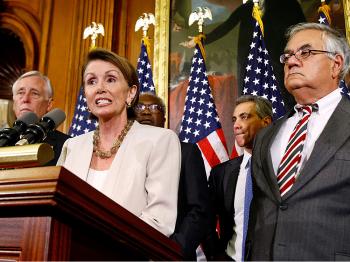 Members of the House voted 228-205 against a draft measure that would have used hundreds of billions of dollars of taxpayer money to buy the toxic assets of failing financial institutions.

News of the failure to green-light the bill sent the Dow Jones Industrial Average down more than 500 points, at one time hitting a plunge of 700 points.

Nearly two-thirds of Republicans voted against the plan, and House Democrats placed the blame of the nay vote on Republicans. Republicans, on the other hand, faulted House Speaker Nancy Pelosi (D-CA) for alienating Republicans in what they say was a politicized speech that railed against Republicans she gave right before the vote.

Pelosi had “failed to listen and to lead,” said Rep. Eric Cantor (R-VA), also pointing out that some 90-plus Democrats had also voted against the bill.

Congressional leaders had agreed on a bailout bill earlier, but bipartisan efforts to push the bill through the House failed despite the pleas of House party leaders to vote for the plan.

“There are no other choices, no other alternatives,” said Rep. Spencer Bachus (R-AL) of the House Financial Services Committee, in the four hours of debate.

Rep. Barney Frank (D-MA) echoed Bachus’s statement adding that “if we defeat this bill today, it will be a very bad day for the financial sector of the American economy and the people who will feel the pain are not the top bankers and top corporate executives but average Americans.

President Bush, who lobbied for the bill along with Vice President Dick Cheney, Secretary of the Treasury Henry Paulson, and Federal Reserve Chairman Ben Bernanke, was “very disappointed,” according to spokesperson Tony Fratto. Fratto said that the President would be working with advisors to “determine next steps” in trying to shore up the economy.