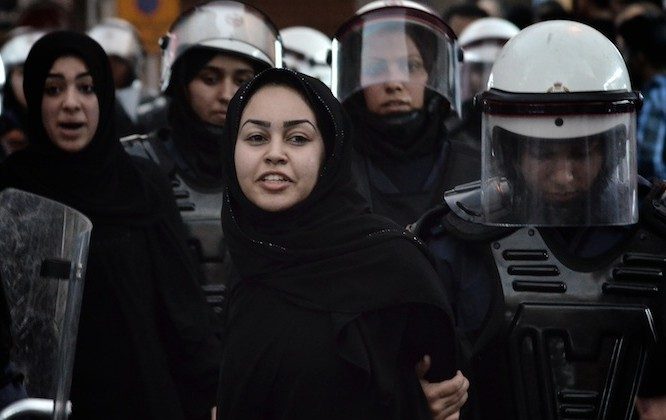 A Bahraini Shiite protester is detained by riot police during an anti-government demonstration in the center of the capital Manama on Sept. 21. (Mohammed al-Shaikh/AFP/GettyImages)
Middle East

Bahrain on Tuesday banned all protests and public gatherings after protesters clashed with police in recent weeks.

Interior Minister Sheikh Rashid Al Khalifah blamed the protesters for abusing the “privilege” of freedom of speech and expression, which he said has disturbed security and general order and would no longer be tolerated. Rallies and gatherings will only be approved of after security and stability are ensured the minister said, reported the state-run Bahrain News Agency.

The protesters’ “privilege has been abused repeatedly by organizers’ violations and the participants’ lack of commitment to the legal regulations,” Al Khalifah said.

Bahraini people are “fed up” with the violations, which “provoked anger among many,” Al Khalifah said, according to the agency.

The Gulf island kingdom has experienced unrest and protests since early last year, but the wave of protests was quashed by the royal family.

The crackdown drew criticism from human rights groups. According to the BBC, around 35 people were killed in February and March 2011.

Khalifah said that now illegal rallies and gatherings would be dealt with via legal means and that all parties involved would be held accountable.