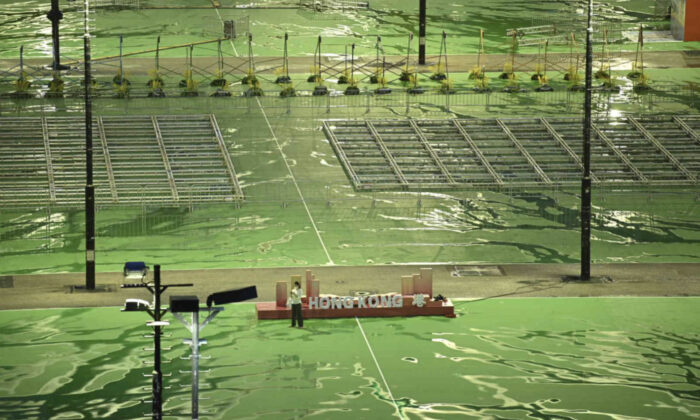 In the evening of July 1, 2022, a number of the exhibits in Victoria Park celebrating the 25th anniversary of the handover of Hong Kong were blown down, leaving only the banner with words "Hong Kong" lying on the pedestal. (Yan Wu/The Epoch Times)
HK Current Affairs

Chinese Leader Xi Jinping encountered stormy weather during his latest visit to Hong Kong. However, he is not the only one. All previous leaders of the Chinese Communist Party (CCP) had suffered violent storms during their visits to Hong Kong.

Xi Jinping visited Hong Kong on June 30 and July 1, 2022, to participate in the inauguration ceremony of the new Hong Kong government and related activities for the 25th anniversary of the handover of Hong Kong. However, the local weather was not too compromising for his visit.

According to the Hong Kong Observatory, on the evening of June 29, a tropical depression in the central,South China Sea, made its approach towards Hong Kong. Affected by it, Hong Kong experienced squally showers and thunderstorms on the June 30, with intense winds blowing offshore and at elevated locations. Precipitation reached 64.9 mm (2.6 inch) on June 30, while Tropical Depression Chaba intensified into a tropical storm.

On July 1, Hong Kong experienced “gusty winds and heavy rain.”  In the afternoon, rainfall in Hong Kong generally exceeded 30 mm (1.2 inch) per hour. At 7:10 in the evening, the Hong Kong Observatory issued the typhoon signal No. 8, and the average wind speed in Hong Kong was forecast to reach 63 kilometres (39 miles) per hour or more.

Affected by the severe weather, at least seven media outlets lost the opportunity to report on the spot. In the evening, a number of the exhibits in Victoria Park celebrating the 25th anniversary of the handover of Hong Kong, were blown down, leaving only the banner with words “Hong Kong,” lying on the pedestal.

In 2012, CCP leader Hu Jintao suffered similar treatment when he visited Hong Kong. At that time, it was the 15th anniversary of the handover of Hong Kong, and Hu visited Hong Kong from June 29 to July 1, to attend relevant activities.

In the early morning of the second day after Hu’s arrival in Hong Kong, typhoon Doksuri followed. On its approach, Hong Kong had gusty winds with heavy rain. At the same time, there were several squally thunderstorms on June 30.

During the typhoon, more than one hundred trees and many scaffolding collapsed in Hong Kong. Many billboards crumbled, and the roof of a factory building podium collapsed during the torrential rain. In addition, a sampan capsized under huge waves on the sea.

Several commemorative activities in Hong Kong were forced to be cancelled, and Hu’s itinerary was adjusted accordingly. He had to visit Hong Kong, Kowloon and other places in the rain, and the inspection time of the CCP garrison in Hong Kong was brought froward by a day. Even so, the officers and soldiers under inspection were all wet.

On May 8, 2001, Jiang Zemin, former leader of the CCP, went to Hong Kong to attend the annual meeting of Fortune Global Forum Hong Kong, hosted by Fortune magazine. On the day he arrived in Hong Kong, the temperature was as high as 32.2 degrees Celsius (90.0 degrees Fahrenheit), and it was unbearably hot.

The next afternoon, Jiang left Hong Kong and returned to Beijing. After the group boarded the special plane for about 20 minutes and was about to take off, there was suddenly heavy rain, with intense winds, lightning, and thunder coming altogether.

Hong Kong’s Oriental Daily News published a report the next day, citing the proverb “Scare in Storm and Rain within Cloud  Nine.” The article said, “Jiang Zemin visited Hong Kong three times and encountered severe weather on two occasions. When he left Hong Kong yesterday, due to severe weather, there were horrific scenes in just that half hour. There was a plane over the mainland China, fifty kilometers (30 miles) away from the Hong Kong Airport, struck by lightning three times which damaged its windshield. Another flight encountered turbulence, injuring three people, and the airport was placed on first level alert. Nearly five hundred people were given a scare, with their journey being delayed.”

On the same page it also reported several other accidents caused by severe weather. The iron windows and glass of a residential unit in Tai Po, Hong Kong, got loose in the wind and the rain, and fell from the 27th floor to the street, injuring two passers-by. Forty-five secondary school teachers and students, participating in an ecological study activity in a country park, were trapped on top of a mountain by the strong wind and rain, and were rescued later. There was also a rare accident In the Kwai Chung Container Terminal due to the strong wind, and about fifty stacked containers were blown over.

The last severe weather reported by the Oriental Daily was in 1997, when Britain officially handed over Hong Kong to CCP. On July 1 of that year, Jiang Zemin went to Hong Kong to preside over the handover ceremony. On that day, It seemed to have “pierced a big hole in the sky,” and he was met with heavy rain pouring down.

The Hong Kong Observatory issued a black rainstorm and landslide warning on that day, with a single-day rainfall of 122.6 mm (4.8 inch), the highest “July 1” rainfall recorded since the handover of Hong Kong.