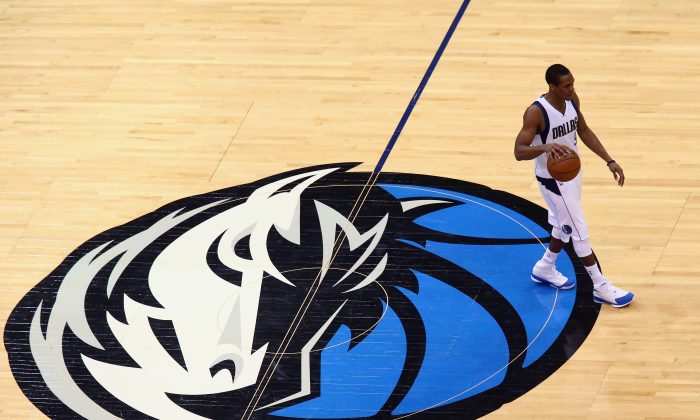 Rajon Rondo is clicking with Dallas Mavericks coach Rick Carlisle, so might end up staying in Dallas after all. (Ronald Martinez/Getty Images)
NBA

Bad News for Lakers and Knicks Fans: Rajon Rondo and Mavs Coach Getting Along Now

Rajon Rondo will be a highly sought free agent this offseason even though he’s declined from being one of the top point guards in the league, and the Lakers and Knicks are at the top of the list of suitors.

The two once-storied franchises are both preparing to make splashes in free agency to try to bolster two of the thinner rosters in the league, with Lakers star Kobe Bryant already personally recruiting Rondo.

“I’m not done. I’m not stopping until he signs an extension,” Kobe told the Boston Herald earlier this season, a few weeks after he and Rondo got together for breakfast.

“You don’t want Rondo? Send him my way. I love everything about him. Everything. I love his attitude, I love his chippiness, his edge, his intellect, his know-it-allness. All of it. That’s what makes championship players,” Kobe said in 2013 when trade rumors swirled around Rondo. Rondo was eventually traded to the Mavericks, but got into a yelling match with coach Rick Carlisle, prompting rumors that he’s not going to stick around Dallas after this season.

But that trajectory has changed, with Carlisle–considered one of the top coaches in the league–pushing through the initial clashing and connecting with the 29-year-old point guard.

Rondo smiled as he told reporters after the Mavericks beat the Thunder that he gets quizzed by Carlisle about the Mavs offense. “It’s just coach and I in the room. He’s yelling at me a lot. I try not to crack under pressure and give him what he needs,” he told reporters, reported Mavs Outsider.

Carlisle has also commented on Rondo’s improvement, praising him.

“I liked everything about the way Rondo played tonight,” he said. “He was aggressive. He was attacking the paint and I just really believe we’re going to keep getting better, and I think he’s a big part of us getting better.”

All this is bad news for Lakers and Knicks fans. If Rondo and Carlisle keep connecting, Rondo is more likely to re-sign in Dallas then go to one of the coasts and play with Kobe or Carmelo Anthony.