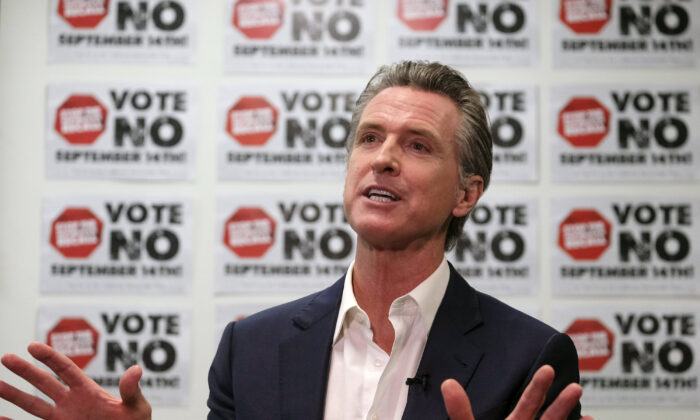 “If it ain’t broke, don’t fix it,” is an old American saying. That’s why efforts to “reform” the California recall process are mistaken.

The Los Angeles Times reported on a poll it conducted with the UC Berkeley’s Institute of Governmental Studies, which found, out of five proposed changes, “the broadest support was for holding a runoff election when a recall succeeds but no replacement candidate wins a majority of votes.” On election eve, on a TV roundup I heard former Los Angeles County Supervisor Zev Yaroslavsky also back such a change.

That or any other change would require a separate initiative by voters. That particular “reform” would guarantee that, even if you could recall a Democratic governor, Part 2 of the process would guarantee another Democrat would replace him or her. So what would be the point?

While in California campaigning against the recall, Sen. Elizabeth Warren said the Tuesday vote itself somehow was anti-democratic—even though a recall is about as pure an example of democracy as you can get. She was echoed by an Aug. 29 article in The New Yorker, “California’s Recall Is a Blow to Democratic Change,” and a post-election article in The Atlantic, “The California Recall’s Warning for Democracy.”

The problem with all these proposals for reform is they’re not needed. Since Gov. Hiram Johnson’s recall and initiative and referendum reforms of 1911, the recall of a governor has succeeded precisely once, of the truly awful Gov. Gray Davis in 2003. That effort was partly tainted because his successor, Gov. Arnold Schwarzenegger, after his first two successful years in office, in his last five years out-Davis’d Davis in advancing horrible policies, including record deficits and tax increases.

But all these new reformers ignore several things. First, the mere threat of a recall is a discipline on the governor—and on the other six statewide offices: lieutenant governor, controller, treasurer, secretary of state, superintendent of education, and insurance commissioner.

After the recall qualified in April, Newsom had to get his act together. Without the recall, it’s possible kids still would be home from school instead of back in the classroom. And we might have a return to a severe lockdown. Such disasters would have cost a lot more than the estimated $300 to $400 million of the election.

Second, as recent elections have shown, recalls and initiatives are about the only way left for any party other than the Democrats to have any say in the Golden State. Proposition 14 from 2010, another Schwarzenegger attack on democracy, effectively eliminated third parties in California—and even drove his Republican Party off the final ballot of the last two elections for U.S. Senate.

Third, the GOP itself, due to such fake reforms and its own blunders, has become almost irrelevant. Democrats should be more worried about the state moving totally toward one-party status, like North Korea or Communist China, than the increasingly remote chance that a Democratic governor might get recalled.

Here are the recent vote totals of Republican candidates statewide for president, governor, and U.S. Senate:

It’s no surprise why California’s population actually has been declining in recent years, with millions of middle-class taxpayers exiled to Texas, Tennessee, and other more sensible locales. Who wants to live in a one-party state?