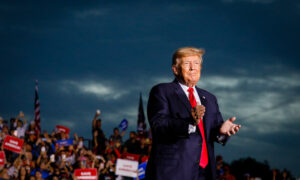 A writer whose home was visited by six men from a terrorism task force was spied on by her employer, it was revealed.

Michelle Catalano reported that she her home was recently visited by the task force around 9 a.m. on a weekday morning. She was not there, but her husband was. They searched some of the couple’s home and asked her husband a litany of questions, after which they departed.

Why did they go to her house? Turns out she was right about one thing but wrong about another. She said she suspected they visited her home because she was recently searching for pressure cookers online while her husband was recently searching for backpacks. Also, her son may have visited a website showing how to make a bomb out of these two, like the one used at the Boston Marathon bombing.

That was correct. But it wasn’t the FBI trawling her computer, or Google somehow keying in on the searches. The Suffolk County detective unit recieved a tip from a computer company regarding “suspicious computer searches conducted,” according to a press release. The employee searched “pressure cooker bombs” and “backpacks” the police said.

Detectives interviewed company representatives then visited the person’s home to ask about the suspicious searches, after which it was determened that the searches were “non-criminal in nature.”