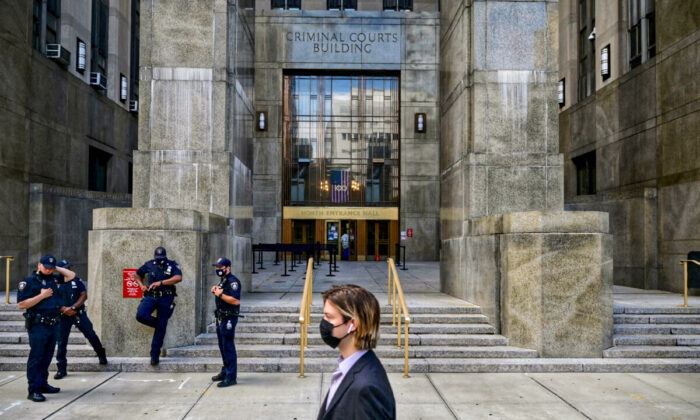 The Criminal Courts Building and district attorney's office in New York on July 1, 2021. (ED JONES/AFP via Getty Images)
US News

State courts across the country have gradually reopened for in-person proceedings, although many have yet to reach their pre-pandemic operating capacity.

State attorneys can barely handle the mounting number of new cases, leaving a trail of extra work every day, all while trying to chip away at the massive backlogs accumulated during months of court shutdowns during the COVID-19 pandemic. Technology and remote hearings have helped to limit the backlog, but they could only go so far in a criminal justice system in which key functions, such as trials, still rely on face-to-face proceedings.

The backlog is especially acute at offices that oversee large urban cities, many of which are also plagued by an increasing shortage of state attorneys.

It’s an unprecedented crisis that won’t go away for years, according to a dozen state attorneys’ offices and state attorneys’ associations interviewed by The Epoch Times. As a result, justice is delayed. In other cases, justice is administered in expedient ways that are often more favorable to the defendants.

At the New York Manhattan District Attorney’s Office, the number of disposed cases dropped by half to around 4,500 in 2020, leaving a COVID-19 backlog of thousands of cases.

In 2021, the office cleared 6,400 felony cases by Oct. 8, all while adding more than 9,000 during the same period. Tony Jordan, president of the District Attorneys Association of New York, likened the court backlogs to water in a swimming pool.

“You fill the pool with a hose, and now, you bail it out with a bucket. It is going to take years,” Jordan said.

At the Seattle-based King County Prosecuting Attorney’s Office, there was an average of 3,300 pending cases at any given time prior to the pandemic. In October 2021, that number had risen to 5,386.

The number of cases closed in 2021 by the Philadelphia District Attorney’s office is 16,600 (more than 30 percent short of the pre-pandemic level in 2019), while adding more than 19,000 new cases during the same span.

David LaBahn, president of the Association of Prosecuting Attorneys, called it an unprecedented nationwide caseload crisis that will take years to tackle.

In the past, the caseload problem was limited to certain offices, but the pandemic court shutdowns have made it a national problem, LaBahn said. To find a historical parallel, you would probably have to go back to the 199os, when the crack epidemic caused a historic surge of crimes nationwide, he said.

Compounding the backlog crisis is an increasing shortage of state attorneys in certain urban cities, he said. Young state attorneys are leaving caseload-heavy offices for either suburban or federal agencies, while old guards are retiring early after working at home for a year or so.

On top of that, new applicants are harder to find. One state attorney’s office used to have 20 applicants for a vacancy, now they only have one or two, LaBahn said.

Nelson O. Bunn Jr., executive director of the National District Attorney’s Association, said state attorneys were hard to recruit even before the pandemic. Low entry-level salaries, high caseloads, and mental pressure after being repeatedly exposed to horrific crimes all make the job less desirable for young talent. The pandemic just made the job even less desirable.

“It is just way too high for an individual to handle,” Bunn told The Epoch Times. “This is not a problem that’s going to be solved overnight. This is a multiyear challenge to address backlogs and to really get the workforce up to where it needs to be.”

Pete Skandalakis, executive director of Prosecuting Attorneys’ Council of Georgia, said there’s a 7 percent vacancy rate across state attorneys’ offices in Georgia, one of the highest vacancy rates the state has ever seen. Offices are getting very few qualified applicants for those vacancies, he said.

Prior to the pandemic, the average number of annual retirements in Georgia was 18. In 2021, the number of retirements is now at 34, according to data provided by the council. The retirement numbers only include state-paid positions.

The pandemic took away three things that make the pressure and challenges of the job worth it, Colorado District Attorneys’ Council Executive Director Tom Raynes told Epoch Times in an email.

Those things are the ability to do trials, cases being resolved with good outcomes rather than settling on pandemic-pressured resolutions (feeling of making a difference in the community and serving victims of crime), and the camaraderie of working with a team.

Some activist organizations are pushing to make these pandemic-pressured resolutions go even further.

For example, the Chicago-based Cook County State’s Attorney’s Office stopped charging people in nonviolent and low-level drug cases during the pandemic. The Chicago Appleseed Center for Fair Courts recommended in a June report that the office go further and dismiss all low-level felony cases in an effort to tackle the backlog.

The Los Angeles County District Attorney’s Office set a zero-dollar bail requirement for most misdemeanors and low-level felonies during the pandemic, and the American Civil Liberties Union recommended making these measures permanent in a December report.