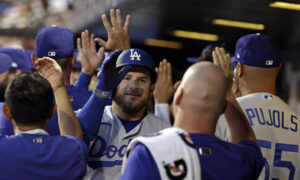 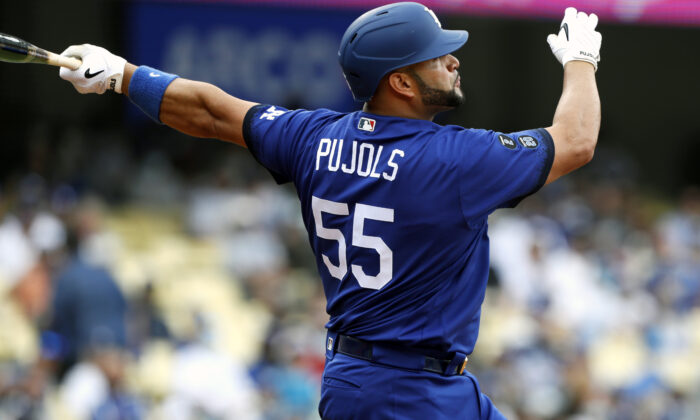 LOS ANGELES—Trea Turner, Albert Pujols and Chris Taylor each homered, and Max Scherzer won for the third time in four starts since being acquired as the Los Angeles Dodgers beat the slumping New York Mets 4-3 on Aug. 21.

The surging Dodgers have won nine consecutive games, matching a season-best win streak. Six of those wins have come against the Mets, who have dropped eight of nine overall.

Kenley Jansen pitched a scoreless ninth for his 27th save. He hit Kevin Pillar to lead off the inning, then got Brandon Nimmo to ground out and struck out Jeff McNeil and Pete Alonso.

The Dodgers had a three-run lead through six innings before Alonso hit a two-run home run, his 28th of the season, off reliever Blake Treinen in the seventh.

New York squandered a ripe opportunity in the fifth when it loaded the bases against Scherzer, all with two outs. Scherzer struck out J.D. Davis to end the threat, but it was a taxing 34-pitch inning for Scherzer, whose day was done after that big strikeout.

Nimmo homered for the Mets, a solo shot to right field off Scherzer in the fifth inning. Scherzer allowed just that one run and five hits. He struck out eight and walked one. Nimmo had three hits.

Rich Hill (6-5) allowed three solo homers over five innings, including Pujols’ 15th of the season. The 41-year-old Pujols previously homered against the 40-year-old Hill on Aug. 17, 2007. The 14-year, four-day span between consecutive home runs off a pitcher is the third longest in MLB history, according to STATS. The only longer stretches were Carlos Beltran and Bartolo Colon, (15 years, 313 days) and Barry Bonds, Jesse Orosco (14 years, 69 days).

Scherzer (11-4) has allowed five earned runs in 21 1/3 innings (2.11 ERA) since being acquired along with Turner from the Washington Nationals on July 30. The Dodgers have won all four games in which Scherzer has started, including a pair against the Mets.