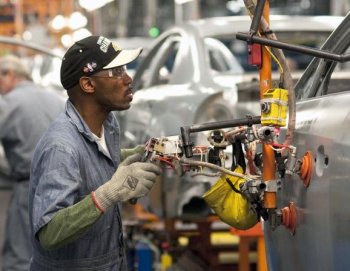 Back in Black: GM Makes First Profit in Three Years

By Antonio Perez
Print
Automotive giant General Motors Co. said on Monday that it has turned the corner and made a solid $865 million profit, its first profitable quarter in more than three years.

The Detroit-based automaker saw its worldwide sales rebound on an expanding global economy. The $865 million profit is a huge improvement over the same quarter last year, when the company lost a staggering $6 billion before filing bankruptcy last summer.

GM is seeing renewed demand in most markets it operates in, and most recently sold 183,997 vehicles in the United States in April, an increase of 6 percent from a year ago. Worldwide, sales were 1.9 million during the quarter, also an increase from the prior period.

The company shed most of its debt following its July 2009 bankruptcy, and disposed of non-core brands Saturn, Pontiac, Saab, and Hummer. Recent woes and negative publicity of rival Toyota Motor Corp. has also helped the U.S. automaker regain some of its market share.

“In North America we are adding production to keep up with strong demand for new products in our four brands,” Chief Financial Officer Christopher Liddell said in a statement. “We’re also steadily growing in emerging markets, keeping our costs under control, generating positive cash flow and maintaining a strong balance sheet. These are all important steps as we lay the foundation for a successful GM.”

Nevertheless, GM’s quarterly profit still trailed main rivals Toyota and Ford Motor Co. during the same period, but a return to profitability is nonetheless a major step in returning to viability.

The company is targeting an initial public offering (IPO) in the near future, possibly later this year, in an effort to fully repay the U.S. and Canadian government bailouts. GM managed to repay its government loans last month, but the governments are still majority shareholders in the current company. The U.S. government is 60 percent owner of the company.

Speaking with reporters in Detroit, Liddell said, “The IPO will happen in good time when the company is ready and the market is ready.”