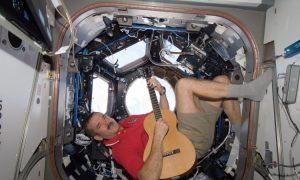 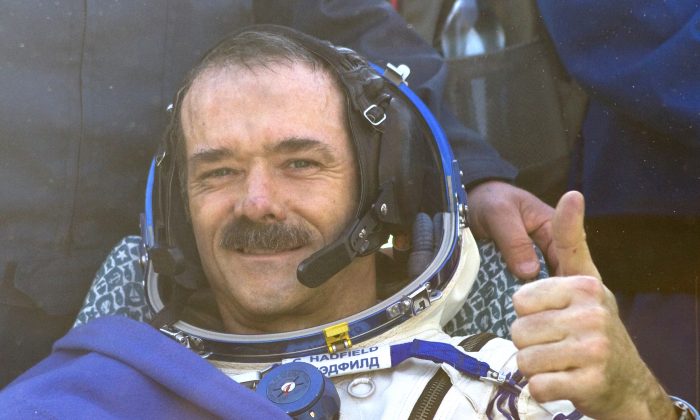 Canadian astronaut Chris Hadfield shortly after his landing in central Kazakhstan on May 14, 2013. He had spent 5 months in the International Space Station and took over 45,000 pictures of earth, compiling 192 of them into a book, “You Are Here: Around the World in 92 Minutes.” (Sergei Remezov/AFP/Getty Images)
New York

Back From Orbit for the Last Time, With Pictures

NEW YORK—Chris Hadfield has had a busy week.

The first Canadian astronaut to walk in outer space has just published a book of photographs he took during his five-month stint at the International Space Station (ISS) and was fielding questions from fans at a book signing in Union Square.

“Armageddon? Nothing,” he replied when asked how closely Hollywood blockbusters resembled actual life in outer space. “Gravity, the visuals they got right…everything else is terrible…I didn’t see Interstellar yet.”

“You Are Here: Around the World in 92 Minutes” contains a selection of 192 pictures out of the over 45,000 pictures Hadfield took by hand from the ISS, capturing landscapes of all types ranging from seas and deserts to modern metropolises.

“What if the person that’s holding the book that I’m imagining in their hands, what if they were floating next to the window of the spaceship with me, what would I want to show them?” Hadfield said of the selection process. “That became the guiding principle for how to choose pictures, so I tried to choose pictures from around the whole world, so that you don’t just see a small subset of the world.”

Hadfield, who has an extensive following on social media, has been praised for his ability to communicate the wonders of space travel to a general audience, a skill apparent in the quirky captions he wrote for his pictures.

In his book, a photo of Roebuck Bay in West Australia is accompanied by a dental x-ray, to which the bay’s jagged shores bore a striking resemblance from the bird eye’s view.

Outer space photography is in many ways easier than taking pictures on the ground because the zero gravity environment means that there are fewer chances to make a mistake in shooting your target.

“Think of all the little things that’s happening. I’m balancing, I’m breathing, my heart is beating, the muscles are firing in my arms, and yet I’m still trying to track this thing smoothly,” Hadfield, while holding a camera, demonstrated at an earlier leg of his book-tour. “In orbit all you have to think about is your heart beat, because just the pulse of your heart will make the camera move. So long as you anticipate that and just get the camera tracking smoothly, we can get really lovely still photos.”

Hadfield was stationed on the ISS for five months from December 2012 to May 2013. Near the end of his stay the station had an ammonia leak, which Hadfield and another astronaut fixed on an emergency spacewalk he said they were completely prepared for.

“[As astronauts,] we don’t visualize success, we visualize failure all the time,” Hadfield said, comparing the task to clinching the answer to an obscure question on an exam one happened to study for.

Hadfield passed around the earth nearly 2,600 times while on the ISS, which travels at more than 4.5 miles per second, so that Hadfield experienced measurable, if slight, time dilation.

“Of course the closer you get to the speed of light, time moves at a different rate,” he mused. “We did do the math. I figured out that I aged less than all of you when I was on the space station by a millisecond a month, so that’s five milliseconds.”

Hadfield, 55, has been to outer space a total of three times, and is now retired. He’s had a triumphant career by most standards, but fell short of his childhood dreams.

Even now, Hadfield is still hopeful.

“If Elon Musk [inventor] comes up with a great engine and starts selling rides that I can afford, I would walk on the moon, we’ll see,” he added.