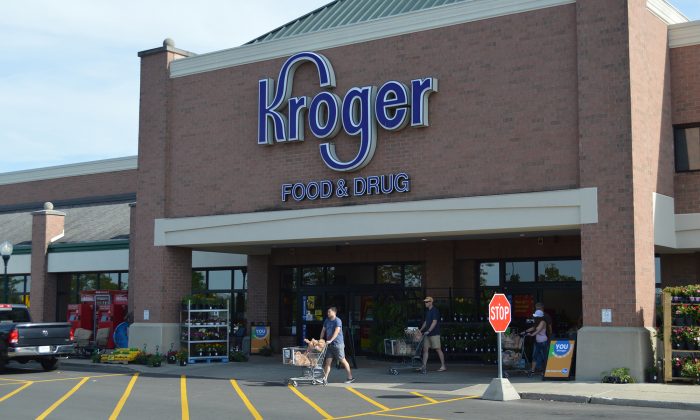 A Kroger store in a file photo. (Illustration-Shutterstock)
US News

A video that has been viewed thousands of times allegedly shows a babysitter at an Indiana Kroger leaving a child in a parked car.

Police in Fort Wayne were called to the location at around 4 p.m. on July 24 after witnesses told police that an infant was left alone for about 20 minutes.

Officials located the owner of the car, and he told police that his wife was babysitting the child, WISH-TV reported. When the woman returned to the car, she found police waiting for her.

Despite the man telling officials that his wife was babysitting, it doesn’t appear that the child belongs to her. Meanwhile, the woman claimed it was her first time babysitting the child, according to WISH.

The woman also apparently got into an altercation with someone recording the video on a phone.

“I was recording her and she started yelling at me, cussing at me, telling me to mind my own business,” Sam Nei, the cameraman of one of the videos, told the station. “She tried to get the police officer to turn around and tell me to stop recording. Well I know in the state of Indiana I can record freely and that’s what I said to her. After that she started getting pretty combative and verbal with me.”

Police spokesperson Sofia Rosales-Scatena told WISH-TV that the videos are connected to the incident.

“Why are you recording?” the woman said, adding that the child is “not even my [expletive] kid anyway,” according to the report.

She also told police that “it was my first time” and “I don’t know why I did it,” WISH also reported.

“Everyone just needs to be aware of their surroundings,” Nei said. “I’m wondering how many people walked past that car before they realized there was a kid. People just need to be more aware and be more cautious on who they have babysitting their kids.”

It’s not clear if the car windows or door were open when the child was left inside. Temperatures in Fort Wayne reached in excess of 80 degrees Fahrenheit.

The parent of the child was called, and police forwarded a report to the Department of Child Services, according to WISH.

The child wasn’t injured. No arrests were made in the case.

One of full videos can be viewed below (Warning: profanity):

Annually, about 38 children under the age of 15 die from heatstroke after being left in a vehicle, says Injury Facts.