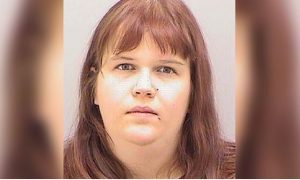 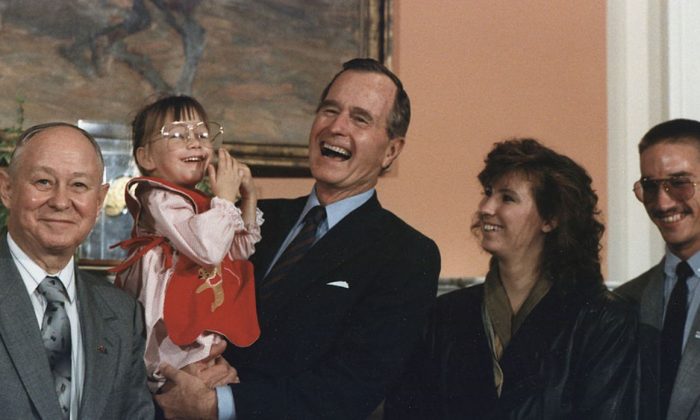 President Bush holds Jessica McClure during the Midland Community Spirit Award Presentation in the Roosevelt Room at the White House. The award was established by the town of Midland, TX and awarded to Sioux City, IA in recognition of the community's response to the crash of United Airlines Flight 232 on July 19, 1989 (Public Domain)
Trending

Baby Jessica Was Famous for Falling in a Well. 30 Years Later, She Speaks Out

In 1987, the entire United States was enraptured by a Texas baby falling into a well.

“Baby Jessica,” as she would be known,” was trapped in the well for 58 hours as rescuers worked to extricate her. The news coverage dominated American airways. At one point, rescue workers heard her singing “Winnie the Pooh” from deep inside the earth.

Fortunately, rescuers were able to get her to safety, and Jessica McClure Morales lived to tell the tale.

“I had God on my side that day,” she told People magazine. “My life is a miracle.”

She is now married to husband Danny and have two children: 9-year-0ld Simon and 7-year-old Sheyenne. McClure now works as a special-education teacher’s aide at a nearby local elementary school.

The ordeal left her with a few injuries, including a scar on her head and a reconstructed foot.

In the People report, McClure said that while she got about $1.2 million in a trust fund set up by people all over the world who watched the rescue unfold, most of it disappeared in the 2008 stock market dive. The remaining money went to the family’s home.

“I think it’s amazing that people would come together like that to donate money to a child that was not theirs,” she said of the strangers’ donations. “I appreciate everything they did.”

McClure said her own children are old enough to understand what happened more than 30 years ago. They’ve also watched old footage of the rescue.

She said that she hopes that by learning from her ordeal, they can “always be humble. And to remember that if you look hard enough, there are so many good people in this world.”

Meanwhile, the well into which she fell was permanently closed.

Another Incident in Indiana

A 5-year-old Indiana boy was rescued without injury after falling 30 feet down a pipe, fire officials said.

Firefighters in Evansville responded and found the boy inside a 16-inch-wide pipe at around 9 p.m. local time on July 4, the Evansville Fire Department said.

The pipe was too narrow for firefighters to rescue the boy themselves. As a result, they decided “to lower a swing set seat down to him,” the department said, ABC News reported.

Wishing the little boy who fell down an abandoned well pipe last night and was rescued by @EvansvilleFire (see picture of the pipe)
First reports incorrectly indicated it was a storm drain. However @EWSUtility does not have a sewer or storm drain on private property. pic.twitter.com/QX9d33TCKR

“The boy was instructed to sit in the seat like he was riding a horse so they could pull him up while the sides of the pipe kept him from falling off,” the fire department added.

Officials said he suffered no apparent injuries other than scrapes and bruises, said officials.

Rescue workers in South Africa pulled a newborn baby from a storm drain in a 4-hour operation that ended with whoops and cheers from onlookers, The Associated Press reported.

Rescue Care Paramedics, one of the groups that helped to extricate the infant girl in Durban, says it is unclear why the baby was “dumped” and that police are investigating.

The group says emergency responders went to the scene on Monday after residents heard a baby crying from deep inside the concrete storm drain. It says the area was dug up and a chisel and hammer were used to break into the drain.