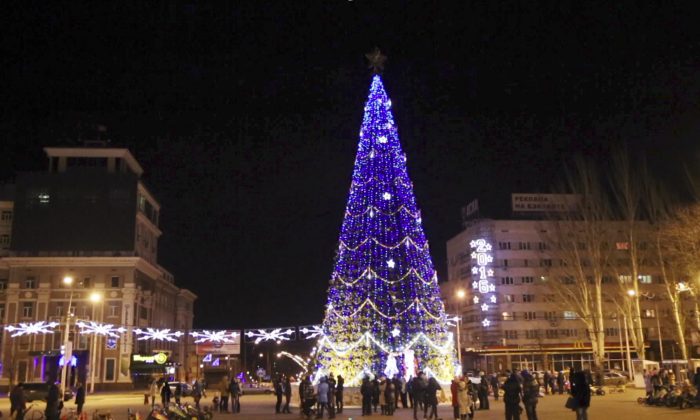 An image from a video taken on Sunday, Dec. 27, 2015, shows the central square is illuminated to mark the upcoming New Year and Orthodox Christmas celebrations in Donetsk, eastern Ukraine. (AP video via AP)
US News

A radio station in Cleveland, Ohio, stopped playing “Baby It’s Cold Outside,” a song from the 1940s, amid the “Me Too” movement.

WDOK Christmas 102.1 said it pulled the song from its around-the-clock rotation of Christmas music this week after a listener complained, Fox8 reported.

The song includes a woman singing about leaving a man’s house as he implores her to stay.

The woman sings, “I really can’t stay” and he responds with “but baby, it’s cold outside.”

“Say, what’s in this drink?” she sings and “I simply must go… the answer is no.”

WDOK midday host Desiray told WJW: “It wasn’t really our decision. It’s the decision of our listeners.” He said the station’s lineup of music is decided by the listeners.

The station posted a poll about the song on its website, and a majority of people said it should be pulled from the station’s rotation.

“People might say, ‘Oh, enough with that #MeToo,’ but if you really put that aside and listen to the lyrics, it’s not something I would want my daughter to be in that kind of a situation,” Desiray explained. “The tune might be catchy, but let’s maybe not promote that sort of an idea.”

On the station’s website, however, the results of the poll aren’t available. It can be accessed here.

The move drew backlash online from commenters around the United States and in Cleveland, accusing the station of giving into rampant political correctness.

“THIS IS NUTS! If we start ignoring or banning anything that is currently politically misaligned we will be doing our history a huge injustice. This is GOING TOO FAR!! Not only that but this is my FAVORITE Xmas song … and yes, I AM A WOMAN!!” wrote one woman in the USA Today comments section.

Said another, “These PC nuts have had their way for too long.”

Added another woman, “It’s a stupid song that was written 75 years ago when men were gentlemen.”

A woman in the comments section for WDOK 102 Cleveland also wrote: “If you guys start giving into this BS, I’m done. Tired of a bunch of snowflakes that get offended about EVERYTHING ruining EVERYTHING for everyone else. If you don’t like it … Turn. The. Channel. Obviously, these sensitive people keep on listening to pick the playlist apart.”

Said another: “Do we really have to make ourselves a victim at every turn? People need to stop teaching our future generations that every little thing is bullying or politically incorrect and that they are always a victim in some way. this is an innocent song about a gentleman that wants to snuggle his ladyfriend. NO ONE THAT LISTENS TO THIS IS A VICTIM. Come on 102… Can’t anything be taken for what it really is anymore?”

Here are the full lyrics to the song: