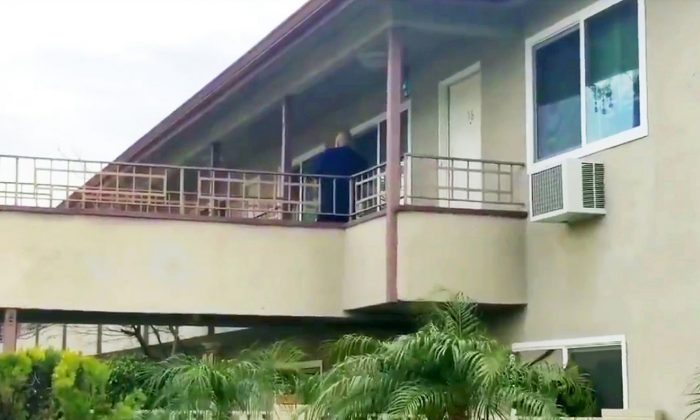 In this still image taken from video, an investigator is seen at the apartment building in Upland, Calif., on Feb. 26, 2019. (Beatriz Valenzuela/The Orange County Register/SCNG via AP)
Crime and Incidents

A mother suspected in the death of her baby girl in California threw her young son from a second-story apartment landing and jumped herself as police arrived, authorities said Feb. 26.

The mother and 1-year-old boy were hospitalized in stable condition, police said.

“This is very unusual. It’s extremely tragic,” Upland police Capt. Marcelo Blanco said. The name of the woman was not released.

Officers in Upland, 40 miles east of downtown Los Angeles, went to the apartment building Tuesday after a neighbor called 911 to report that a child was screaming or crying, Blanco said.

The woman then noticed that the child’s mother was holding the boy over the landing.

“She proceeded to drop the child down from the second story,” the captain said.

The boy fell about 12 to 15 feet and the mother jumped when officers arrived, Blanco said. She landed face down, suffering facial injuries.

Police then made a safety check of the second-story apartment and found the woman’s approximately 7-month-old daughter inside. She wasn’t breathing.

Her breathing was restored but she died at a hospital, Blanco said.

The cause of her death will be determined but she had a possible skull fracture and internal injuries, he said.

The mother is considered a suspect in her death and the case is being investigated as a homicide, he said. Police had not yet determined a motive.

The distraught father spoke to police but “has no idea what led to this,” the captain said.

Blanco wasn’t aware of police being called to the apartment previously.

According to a report published by the U.S. Department of Health & Human Services (pdf), approximately 3.5 million children nationwide in 2016 were the subjects of at least one maltreatment reports to authorities in the year 2016.