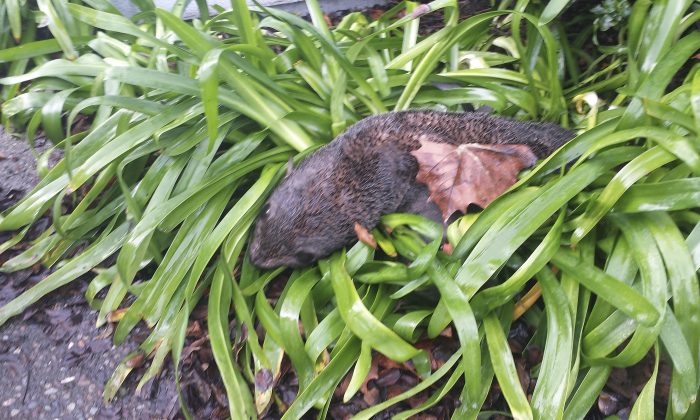 An emaciated baby northern fur seal that was found in some bushes at a business park in Hayward, Calif., on Jan. 20, 2016. (Marine Mammal Center via AP)
US

HAYWARD, Calif.—An emaciated baby northern fur seal is recovering after it was found in some bushes at a San Francisco Bay Area business park, his second escape attempt in just a few months.

Hayward police said on the department’s Facebook page that the dehydrated and malnourished seal was found after someone called about the pup around 6 a.m. Wednesday.

Police say the seal—somehow—got out of the water, crossed busy Interstate 880 and found its way to the bushes.

Police at first thought the caller was mistaken and the furry fellow was really just a “possum or a weird cat.”

Police called the Marine Mammal Center in Sausalito. Center spokeswoman Laura Sherr confirmed to KNTV that her team picked up the animal, which they hope to nourish and send back into the wild as soon as possible.

This was the second time the baby seal, who has a tag on him, had escaped. Pipester, as he is known, had previously been in the center’s care for malnutrition after he was rescued last November at Moss Landing Harbor by volunteers. He was released in December. The center rescued a record number of northern fur seal pups in 2015, more than three times as usual.