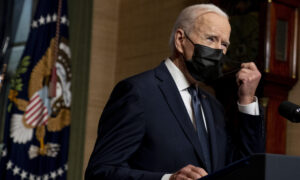 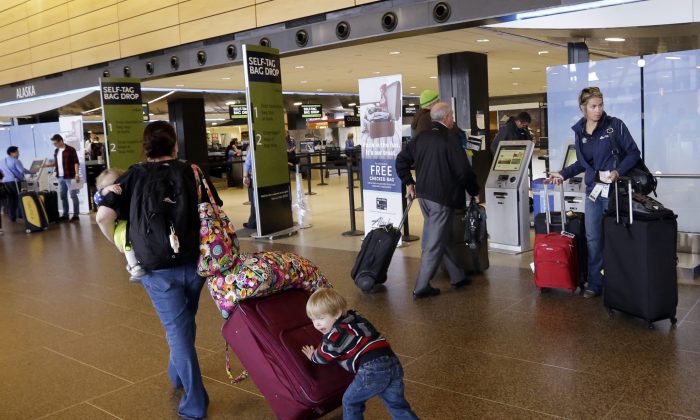 Colin Drummond, 4, pushes luggage from behind as he walks with family members to check-in a relative for an Alaska Airlines flight at Seattle-Tacoma International Airport in SeaTac, Wash., on March 24, 2015. (Elaine Thompson/AP Photo)
US News

The parents of a baby born on Nov. 19, have quite a story to tell.

It started when Heather and Billy Gibbs, his parents, were about to get on a plane from SeaTac to Kentucky. Heather began feeling intense cramps and believed she could go into labor.

Wyatt Dale was born in the toilet of a public restroom at Sea-Tac International Airport.On KIRO 7 at 11, what two…

The expectant mother then went into the airport’s restroom and sat on the toilet.

“I hadn’t felt anything all day and all of sudden out of nowhere he came,” said Gibbs.

Firefighters were called to the scene. “I heard a splash in the bathroom followed by some frantic shouting of “Someone grab my baby,” said firefighter Steven Barberie, who responded to the call.

The father, Billy, said he looked inside the bathroom and was in disbelief.

“I looked inside and I saw the firefighter EMT pulling him out of the toilet and I was in utter shock,” he said.

The child was transported to a nearby hospital and his parents said he’s doing fine. The boy was born 11 weeks early.

“My doctor said it was divine intervention,” said Gibbs. “Because within minutes we would have been on a plane in the air, coming right back down.”

According to a GoFundMe set up by a family member, Heather Gibbs was six months pregnant.

“At 6 months pregnant, it was a complete and utter shock to find herself in labor, at the airport. Wyatt Dale Gibbs was born in the restroom of the Sea-Tac Airport, 3 months early. At this time, ‘Baby Sea-Tac’ is the second baby born in the airport in over 40 years. Thankfully, both mother and baby are as healthy as anyone could hope for,” the GoFundMe page says. They were going back home to Kentucky along with their 18-month-old son.

The family member said the family has to stay in Seattle for the next three months while the child remains in the hospital’s NICU ward.

“Currently, they do not have living arrangements, clothing for their son, Beau (their luggage left the state without them!), diapers, and other necessities. Any and all funds collected will go to the family to get through the next few months,” it says.

Earlier this year, a woman left a newborn infant in the bathroom of an airport in Tuscon, Arizona, according to The Associated Press. AP released a photo of a woman holding the baby.

An airport employee in January found the child abandoned in the restroom near the rental car section.

The infant was lying on the changing table.

“Please help me. My mom had no idea she was pregnant. She is unable and unfit to take care of me. Please get me to the authorities so they can find a good home,” a note read.

The baby was handed over to the Arizona Department of Child Safety. Officials believe the woman gave birth in the Concourse B bathroom of the airport.