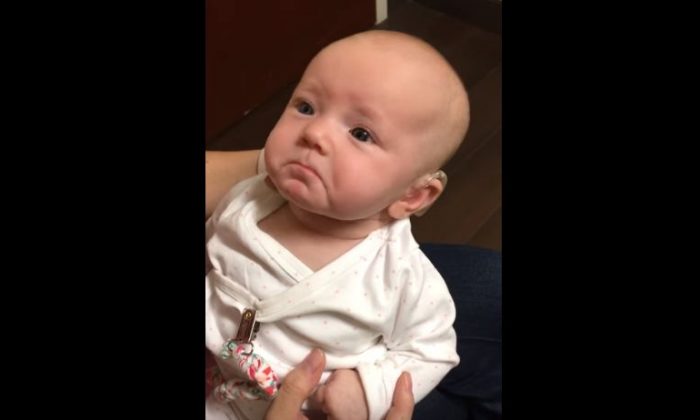 Christy Keane’s baby, Charly, was born deaf. But now, she can hear a bit better.

In a viral video, Charly can hear her mother tell her, “I love you” for the very first time.

Keane, of Virginia Beach, Virginia, said, “We had our miracle moment that I have been praying for when Char got her hearing aids,” according to a Facebook post.

“We didn’t think she would hear anything, so this was more incredible than I can put into words,” she added.

“A special thank you to Eastern Virginia Medical School and Children’s Hospital of The King’s Daughters (CHKD) Audiology and ENT department for being so awesome at what you do and giving us this moment to share,” Keane wrote.

Charly got her hearing aids put in for the first time in the video, it was noted.

“I was not expecting such a large response to the post,” Keane told GoodHousekeeping.com, saying that millions of people watched it, while hundreds of thousands shared and reacted to it on the social media platform.

“I thought, ‘Oh, what’s the harm? I’ll make it public,” she added. “And then, I think I woke up the next day with a thousand shares and by Monday it had hit a million.”

“I had never in my life seen that face before,” Keane said of her baby’s reaction. “I’m her mother, and I know the look in her eyes when she’s sad, upset or hurting, and that connection, and that moment when our eyes met and she heard my voice for the first time, that was true emotion from her.”

Her husband filmed it, she said.

“He was as emotional as I was,” she added. “All this time that we had spent sad that she wasn’t able to hear us, all that pain went away.” The hearing aids were given to the family from donors.

She said that when her daughter was initially tested, doctors said Charlotte had bilateral profound congenital hearing loss. That can occur in one out of every 1,000 to 2,000 births, The American Hearing Research Foundation said.

“She has very profound hearing loss and is not and will not be cured,” Keane added. “She will always be deaf and we can not tell what degree of hearing the aids are giving her, we just know she’s showing great and positive responses.”