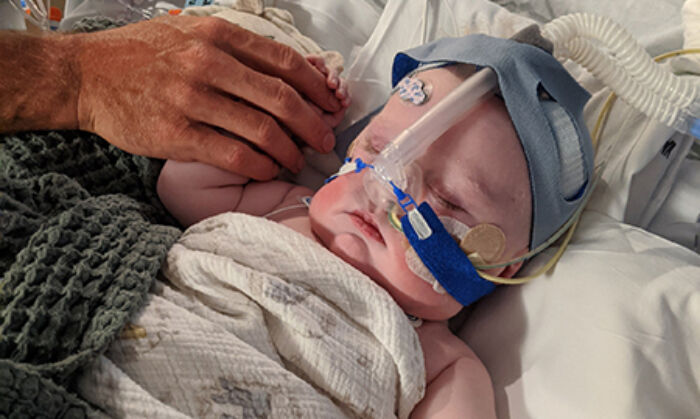 Baby August Stoll has a new heart after a life-saving transplant. (Courtesy Stoll Family)
US

A Tennessee baby initially denied a life-saving transplant for not being vaccinated has now received a new heart.

“We imagine we will never fully reconcile the grief that comes with the joy of being gifted with this second chance at life for him,” Hannah Stoll, the mother of 7-month-old August, told The Epoch Times.

The infant received his new heart on July 17, surviving an eight-hour operation “against all odds,” Stoll said, who added that he was already making eye contact with his family and four siblings.

Baby August captured the nation’s attention last month when The Epoch Times reported that a transplant doctor at the Vanderbilt Pediatric Heart Institute in Nashville refused to place August on the list of candidates for organ transplants because he hadn’t received any of the recommended vaccines for infants.

Stoll told The Epoch Times that she and her husband, Clint, reluctantly agreed to give August some of the vaccines in order to get him on the list for a heart transplant. They declined to comment further.

According to the recommended schedule of vaccines that Vanderbilt’s immunology department provided to the Stolls, August would originally have had to receive more than 15 vaccines prior to undergoing a heart transplant at Vanderbilt.

Deborah Catalano, senior legal counsel for Liberty Counsel, who assisted the family in their efforts to get August on the heart transplant list at Vanderbilt, told The Epoch Times that physicians need to stop treating federal recommendations as mandates.

“In relying on [Centers for Disease Control and Prevention] protocols and recommendations, doctors are not involved in the practice of medicine,” she said. “They are allowing themselves not to look at the science.”

Catalano currently represents more than 50 transplant candidates denied surgery because of their vaccine status, with most cases related to the COVID-19 vaccine.

According to a recent study, around 40 percent of transplant centers require the vaccine.

News that August, who was born with a congenital heart condition, was denied a life-saving transplant because of his vaccination status led to public outrage and a call for an investigation by Tennessee legislators.

“You shouldn’t deny life-saving treatment to a 6-month-old baby based on a legitimate concern a parent has,” Tennessee state Sen. Jack Johnson told The Epoch Times last month.

“As a parent, I would be beside myself.”

In February, a group of Republican congressmen introduced federal legislation called the Stop Arduous Vaccine Enforcement (SAVE) Act, which would outlaw hospitals from denying organ transplants to patients based on their vaccination status.

The bill was born mostly as a result of hospitals requiring the COVID-19 vaccine for transplant candidates.

The legislation is endorsed by the Association of American Physicians and Surgeons.

Stoll said that the cardiac surgeon who performed August’s life-saving transplant on July 17 wasn’t the same doctor who refused to put her infant son on the list for a donor’s heart.

“We have nothing but gratitude for him,” she said, referring to surgeon.

It was when August’s cardiologist referred him to Vanderbilt for a transplant that his vaccination status became an issue, with one doctor in particular leading the effort to refuse to refer the baby for a heart transplant, Stoll said.

She called the position of the doctor “illogical.”

Despite her anger, she asked The Epoch Times not to reprint his name because he received death threats following earlier reports about August’s story.

A source, who asked to remain anonymous, told The Epoch Times that the doctor was removed from August’s case following the reports.

The Vanderbilt Pediatric Heart Institute is ranked as one of the top facilities in the nation that performs major heart transplants for infants.

It’s part of the Vanderbilt University Medical Center, which was the subject of the ABC documentary series “Last Chance Transplant,” highlighting the hospital’s life-saving procedures.