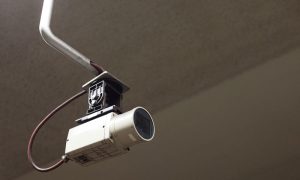 Police say a 20-year-old woman abandoned a baby on a stroller at a subway platform in New York on Monday.

Police had released this surveillance video of the woman they say pushed the stroller off a train at Columbus Circle, and got back on the train without the child.

News outlets couldn’t seem to agree on the woman’s relationship to the child. She has yet to be publicly identified by police.

Although some media outlets are assuming the woman arrested is the baby’s mother.

Like here on WNYW, you can see the text says, “mother of abandoned girl caught.”

Other outlets were a little more careful, never calling the baby the woman’s child, like here in the New York Times.

WCBS reports the woman has actually admitted to being the child’s mother, but then still labeled her “woman” in the video.

After she got the subway, someone reportedly recognized her from the photos released by law enforcement, and called the police. Investigators then took the woman in for questioning.

The child was thought to be 7 months old, and while the child would have been too old for state haven law, the state does have one, meaning a baby up to 30 days old can be left with any responsible person at a suitable location in New York.

These laws decriminalize giving up a child.

Multiple reports say a bystander saw the stroller, and stayed with the child about 20 minutes before deciding to call the police.

The child is in the care of the Administration for Children’s Services.