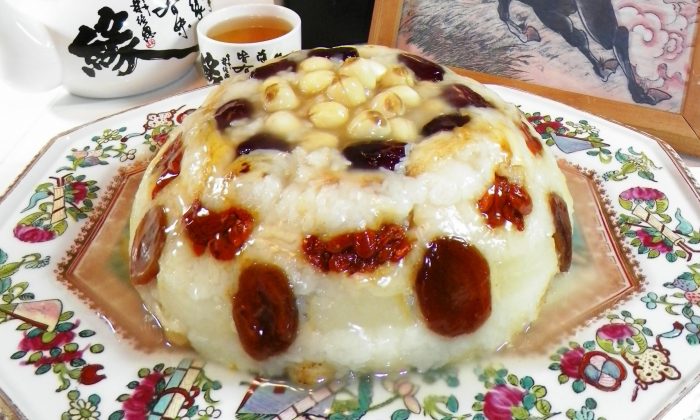 This is the result of a Westerner’s attempt at the traditional Chinese dish Ba Bao Fan, or 8-Treasure Rice Pudding, used to celebrate Chinese New Year and other auspicious occasions. Year of the Horse art by Jane Ku. Credit: Tanya Harrison/Epoch Times
China

I attempted my first Ba Bao Fan (八寶飯), or Eight-Treasure Rice Pudding, many years ago. I made it as a gift for a lovely Chinese couple to celebrate the Chinese New Year, our friendship, and the birth of their first son.

My first rice pudding was small and simple, pretty, and made with ingredients not likely available in ancient times. And, although my friends were quite impressed that I tried to make it, looking back I realize I had no idea of the actual significance of this Chinese dish.

However, I decided to try my luck again and made Ba Bao Fan for friends to celebrate the Chinese New Year. I also learned a little more about what a treasure it truly is!

One story suggests Ba Bao Fan was created in 1600 B.C. to celebrate eight meritorious warriors who helped King Wu conquer the Zhou. It was a fitting dish for such a momentous victory. Another tale from the Qing Dynasty reveals that the rice pudding was a well-kept family secret in an obscure Chinese county until a smart magistrate discovered it and presented it as a birthday gift to a dowager empress. Through this lucky decision, he gained a promotion! Whichever story you choose, Ba Bao Fan likely has an illustrious origin.

Why eight treasures? Well, if the pudding was indeed representing eight valiant warriors that would be explanation enough. But there is actually more to it. The number eight is an auspicious, or lucky, number for the Chinese. In Mandarin, “ba,” eight, sounds like the word for wealth or prosperity and it is a homophone for fortune or wealth in Cantonese (fa), too. The number is also perfectly symmetrical, a balance that represents an ideal. Of course, the number of ingredients differs recipe to recipe just as does the type of ingredients. Regardless, this concoction is always called 8-treasure rice pudding. Traditionally, the foods eaten during Chinese New Year have symbolic meanings and Ba Bao Fan definitely meets this requirement.

Ba Bao Fan is not lucky just because of the number of treasures. According to traditional recipes, it is a healthy dish that balances tastes and properties. Wishing someone good health as well as prosperity is a traditional Chinese New Year custom. The ingredients I chose all have uses in Chinese medicine.

Lotus seed or 蓮子 (lián zǐ): Lotus seed is an astringent and is considered a restorative medicine. It has a neutral nature and is believed to strengthen spleen and stomach function. Of the five tastes, it belongs in the sweet category. It is also said to calm nerves and relieve thirst.

Chinese red dates or 紅棗 (hónɡ zǎo): In Chinese medicine, red dates have a warm nature. They are used to balance medicinal formulas and food. Red dates act on the stomach and the spleen and they promote better digestion. They are in the sweet taste category.

Longan or 龍眼 (lónɡ yǎn): Longan is a low calorie fruit full of Vitamin C. It has a warm property and is used as a blood tonic. It is believed to relieve insomnia and anxiety, acting on the heart and the spleen. It is also a sweet taste.

Goji berries or 枸杞 (gǒu qǐ)  (also called wolf berries): Goji berries have many vitamins, minerals, and amino acids. They are said to reduce blood sugar and improve eyesight. They have a neutral temperature and also belong to the blood tonic group of herbs. They affect liver, lung, and kidney functions. Their taste category is sweet.

Winter melon or 冬瓜 (dōnɡ ɡuā): According to Chinese medicine, winter melon is a “cool” food. It functions as a blood tonic and releases heat. It acts on the lungs, stomach, and intestines. Its taste category is sweet.

Apricots, 杏(xìng): The apricot is symbolic of traditional Chinese medicine based on stories in the historical text “Biographies of Divine Immortals” (???) about Dong Feng and his apricot grove. Although somewhat controversial in all its uses, apricots are believed to suppress cough and reduce phlegm. They are generally warm in nature and affect the lung and large intestine. Their taste category is bitter.

Lily bulb or 百合(bǎi hé): Lily bulb has a slightly cold temperature. It is used as a tonic and believed to be calming, to promote restfulness, and reduce irritability. It acts on heart and lung and may also relieve cough and dry throat. Its taste category is also bitter.
Who knew that such a tasty treat might also be good for you!

When I decided to prepare Ba Bao Fan this year, I wanted to stick to a traditional recipe as much as possible. I referred often to Chinese cookbooks written in English and Chinese that I bought in San Francisco’s Chinatown many years ago. I also made adjustments based on modern opportunities.

Although the rice pudding has many variations, to include more and less “treasures,” I chose to use eight ingredients that were likely available in ancient China. The amounts of most of the treasures I used are multiples of eight as well.

Where possible, I used organic or natural foods. I also made my own red bean paste with a 15 oz. can of organic aduki beans, pushed heartily through a mesh strainer and drained thoroughly with cheesecloth, and a 3/4 cup of organic cane sugar.

It’s important to be careful with moisture in this recipe. The rice should be sticky yet “dry” so that it will retain its shape after it is steamed and when the mold is removed.

Also, be careful not to manipulate your fruit design too much. If you displace the shortening used to grease the bowl/mold, the concoction will stick to the bowl, ruining the design when turned out.

Instructions:
Rinse the rice under cold running water until the water is clear. Cook the rice in a steamer or a pot, about 40 minutes.

While the rice is cooking, put the lotus seeds in a pot with 2 cups of cool water. Bring to a boil, and then simmer for 20 minutes. Allow to cool, set aside.

Rinse the red dates then steam them, with your preferred method, until tender—about 10-15 minutes. Carefully remove the pits without changing the shape of the dates then set aside.

Soak the goji berries for about 10 minutes, rinse and set aside.

Rinse the dried lily bulb, set it aside.

When the rice is done and while it is still hot, mix in the shortening and the sugar.

Coat the inside of a medium-sized bowl with shortening. Arrange the fruits in an attractive pattern in the bottom of the bowl and up the sides. Use half the rice mixture and pack it on top of the fruits, being careful not to dislodge them. Make an indentation in the center of the rice in the bowl. Place the red bean paste, rounded, in the space, and then fill the bowl with the rest of the rice mixture, covering up the bean paste. Pack the rice down again.

Place the filled bowl in a steamer with enough water to steam for 45-60 minutes.

Place a serving plate over the bowl of pudding and invert it. Remove the bowl. If necessary, use a knife around the edge of the pudding to loosen it. Prepare the glaze as below:

In a small saucepan, bring the water to a boil. Add the sugar and stir until it is completely dissolved. Turn down to medium heat and slowly stir in the cornstarch mixture to thicken.

Pour the glaze over the entire pudding, letting it pool around it on the plate. This dessert can be eaten warm or cold.

Invite your friends and enjoy! And Happy Year of the Horse!