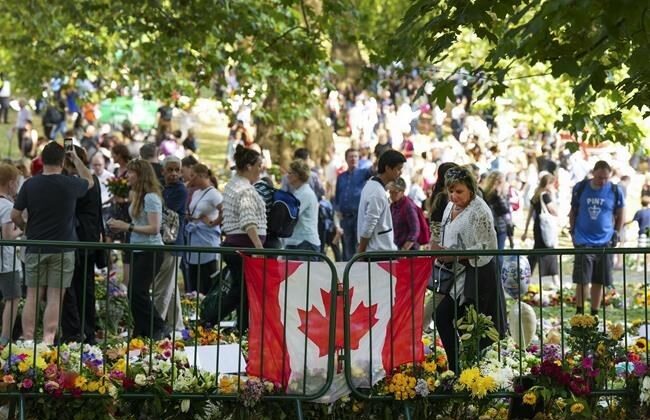 Long lines of mourners lay flowers near a Canadian flag as people wait to pay their respects to Queen Elizabeth II near the gates of Buckingham Palace in London on Sept. 11, 2022. ( The Canadian Press/Nathan Denette）
Canada

BC to Close Schools, Give Public Workers Day Off to Mourn Queen on Sept. 19

The British Columbia government says it will follow the federal government’s lead and honour the national day of mourning to mark the funeral for Queen Elizabeth II on Monday, Sept. 19.

It says public schools, post-secondary institutions and most Crown corporations will be closed.

A statement from the province says it’s a national day to reflect on the “incredible life of Canada’s Queen and the longest-serving monarch in British history.”

Prime Minister Justin Trudeau declared that Monday will be a holiday for federal government workers to mourn the Queen on the day of her state funeral in the United Kingdom.

Saskatchewan, Ontario and Quebec are not recognizing the holiday.

B.C. Premier John Horgan said in a statement that the province was encouraging private-sector employers “to find a way to recognize or reflect on the day in a way that is appropriate for their employees.”

The province had earlier announced that a ceremonial procession and commemorative service for the Queen would be held in Victoria on Monday, starting with a walk from the legislature to Christ Church Cathedral, followed by a 21-gun salute.

Horgan, Lt.-Gov. Janet Austin, members of the Canadian Armed Forces and other dignitaries will take part in the procession, and there will be limited public seating in the cathedral.

The procession in B.C. leaves the provincial legislature at 10:15 a.m. and the service from Christ Church Cathedral in Victoria will be livestreamed for those who can’t attend.

The Queen’s funeral service is scheduled to take place at 3 a.m. PT Monday in London.