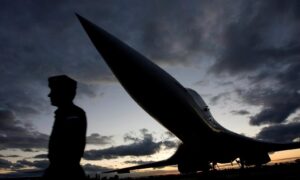 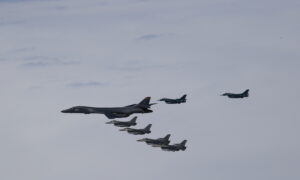 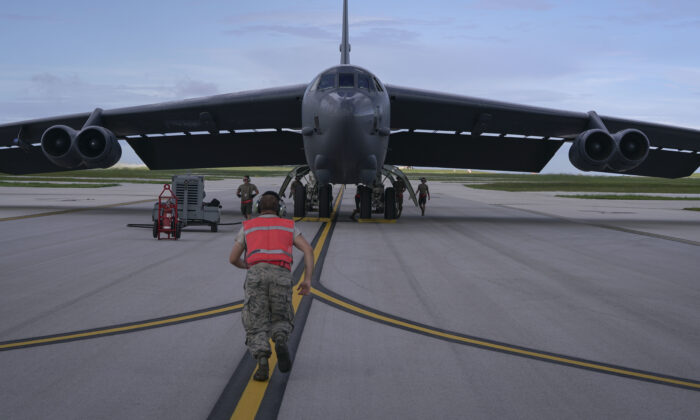 A B-52 bomber flew non-stop from Louisiana to the South China Sea, where it joined two aircraft carriers over the weekend, in the latest demonstration of a new U.S. strategy designed to keep adversaries on their toes.

“One B-52 Stratofortress bomber from the 96th Bomb Squadron, 2nd Bomb Wing, Barksdale Air Force Base, Louisiana, took off from home station and participated in a maritime integration exercise with the USS Nimitz and USS Ronald Reagan carrier strike groups in the South China Sea before landing at Andersen Air Force Base, Guam,” according to a July 5 statement from the U.S. Air Force.

In the past few months, the Air Force has been sending bombers from the mainland United States to Europe and the Pacific on bomber task force missions to demonstrate a new strategy known as dynamic force employment.

The new strategy, created in response to the National Defense Strategy in 2018, allows the military as a whole to launch more deployments and missions unpredictably from the mainland.

The Navy has abandoned the year-long clockwork deployment cycles that allowed adversaries to predict when and where U.S. carrier groups would be sailing.

The U.S. military has pivoted during the Trump administration to face what it describes as “renewed Great Power Competition” with Russia, and even more significantly with China.

Two carriers, the USS Nimitz and USS Ronald Reagan, carried out operations and exercises in the South China Sea over the weekend “to support a free and open Indo-Pacific,” the Navy said in a statement.

The Navy didn’t specify where the exercises were being conducted in the South China Sea.

“The purpose is to show an unambiguous signal to our partners and allies that we are committed to regional security and stability,” Rear Adm. George M. Wikoff said, according to The Wall Street Journal.

However, Wikoff said the exercises weren’t a response to recent Chinese military exercises in the region, which had stirred criticism from Washington.

The two carriers were joined by the B-52 bomber during the exercises, which, after 28 hours non-stop flying, landed on the strategically important U.S. base on the island of Guam.

For the first time in 16 years, Guam has been left without a permanent bomber presence since April, as the U.S. Air Force shifted toward its new deployment model.

“Bombers will instead be employed in a far more dynamic fashion, or they’ll be surged from home stations, predominantly, if not exclusively in the continental United States, and conduct missions around the world,” Timothy Walton, a defense analyst at the Hudson Institute, previously told The Epoch Times.

“This shift initially drew some concern because continuous bomber presence has been viewed by U.S. citizens in the Marianas, and then U.S. allies in the region as a clear signal of U.S. resolve in the region.”

However, the vigorous adoption of the new approach over the past few weeks has alleviated some of the concerns allies have, Walton said.

“In fact, it’s likely that bombers operating from U.S. bases are now even more capable than they were in the past.”