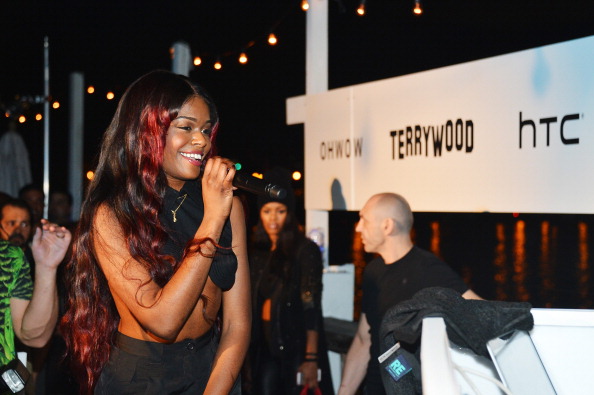 Azealia Banks attends the OHWOW & HTC celebration of the release of "TERRYWOOD" with Terry Richardson at The Standard Hotel & Spa on December 7, 2012 in Miami Beach, Florida. (Photo by Frazer Harrison/Getty Images for HTC)
Social Media

Azealia Banks, the rapper-singer, has gotten into a war of words with Atlanta-based rapper TI, and TI responded.

“I saw you backstage at Kanye and you had nothing to say,” Banks wrote. “I stood next to you ON PURPOSE. To see if you would say something.”

She made a few more inflammatory statements before insulting TI’s wife, Tiny Harris.

Before deleting the Instagram post, TI said in part: “If u speak ill of my family again….. I WILL END YOU!!!!!!” He added: “… people fall down stairs daily…. U better watch yo step,u ungly-[expletive] Gremlin-baby #nerveofdisCretin …”

The screengrab was captured and uploaded to BuzzFeed.

DENVER (AP) — A shooting involving rapper ScHoolboy Q after a concert at the historic Red Rocks amphitheater west of Denver was likely not a random act of violence, authorities said Saturday.

“This is not just a coincidence. We think there is probably more to it than that,” said Jacki Kelley, a spokeswoman for the Jefferson County Sheriff’s Office. “It does seem to be more targeted than random.”

The rapper was not hurt in Thursday night’s shooting, but three other people in the vehicle he was in sustained non-life threatening injuries. One of the victims was released from the hospital Friday morning.

No arrests have been made, but Kelley said investigators have received numerous tips and are trying to determine a motive for the attack in a parking lot at the outdoor venue, where the Beatles and Grateful Dead have performed and U2 filmed “Under a Blood Red Sky.”

ScHoolboy Q, whose birth name is Quincy Matthew Hanley, is from Los Angeles. His most recent album, “Oxymoron,” debuted at No. 1 earlier this year and reflects his life as a father and former gang member.

He and Kendrick Lamar, who was nominated for seven Grammys this year, are members of Black Hippy.

ScHoolboy Q said on Twitter Friday that he was OK.

In March, when ScHoolboy Q played at a sold-out show in Denver, someone in the crowd threw an object at the performer, who jumped off the stage to confront the person, The Denver Post reported. Security staff separated them.

The rapper and at least four other people were in the white SUV that was fired on at the venue in the foothills west of Denver, authorities said.

They drove themselves to a Denver intersection about 15 miles away, apparently in search of a hospital, before being stopped by Denver police and taken for medical attention, Kelley said.

ScHoolboy Q and another uninjured person were briefly handcuffed while police assessed the situation, but no one in the vehicle was arrested. Kelley said ScHoolboy Q was not a suspect in the shooting.

Nas and Flying Lotus also performed at the concert that benefited three groups, including the Gang Rescue and Support Project of Denver. Kelley said she did not know if Thursday night’s shooting was gang-related.

Promoters said the gang rescue group received 5 percent of the profits. Two other groups also got 5 percent each: Preserve the Rocks, which helps preserve the Red Rocks venue, and Helping Our People Excel, a Denver-area charity with a food pantry and other services.

About 4,500 people attended the concert at the amphitheater, which seats as many as 9,525 people.

The amphitheater and surrounding park are popular with joggers and sightseers.