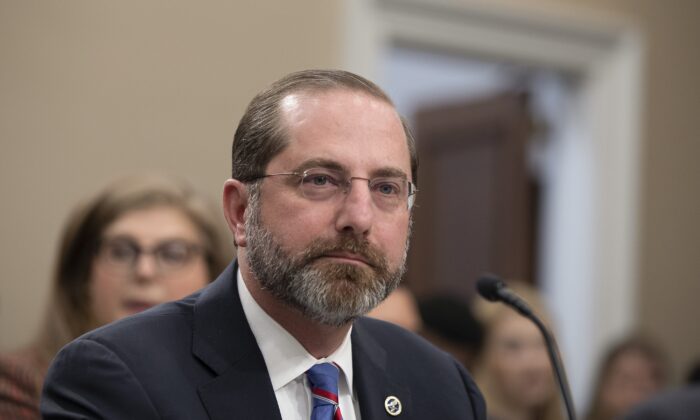 Health and Human Services (HHS) Secretary Alex Azar on Sunday revealed why federal officials announced that the first American death from the COVID-19 coronavirus was a woman before officials later clarified that it was a male who died while adding that health officials are still not sure how the person contracted the mysterious new virus.

Azar, during an interview on CBS News’ “Face the Nation” on Sunday, was questioned about the misidentification, to which he responded that the outbreak is a “very fast-moving situation.”

“Our Centers for Disease Control (CDC) were up late at night, very early in the morning, working with the Washington state public health office and inaccurately reported that the individual was a female, that’s what the president was briefed on, they’ve apologized for incorrectly briefing on that but it’s a very fast-moving situation,” Azar told the broadcaster, saying “we obviously regret the error.”

The first death was reported in Washington state, identifying the victim as a male in his 50s who had underlying health problems. He died at the EvergreenHealth Medical Center in Kirkland, a suburb of Seattle, according to federal officials on Saturday.

A state of emergency was declared in Washington state following the lone death by Gov. Jay Inslee, who said state officials need to “prepare for what could likely be a worldwide pandemic.” Officials, meanwhile, are investigating whether there may have been an outbreak at a nursing facility in Kirkland after a resident and health care worker both tested positive for COVID-19, a disease caused by the novel coronavirus believed to have originated in central China in late 2019.

Azar added that it is still unclear how the first American to die of COVID-19 actually contracted the virus, as there was no evidence he had any connection to a person who traveled to an outbreak area such as South Korea, Iran, Italy, or China.

“We do not know how he contracted the virus yet. And so that’s why we and the state of Washington are deployed out there to try to trace who he had contact with and how he might have gotten the virus. That’s why we call it right now a potential community case, meaning we don’t have a discernible connection to any travel to Korea or China or any other impacted area,” Azar remarked.

Following the weekend escalation, Azar told CBS that “the risk to average Americans remains low, we’re working to keep it low,” but he stressed that there will be “more transmission of cases in the United States.” In elaborating on why, the top U.S. health official said that it is “simply a matter of math.”

His comments were made as President Donald Trump on Sunday announced that passengers traveling from certain high-risk countries will be screened before boarding as well as when they arrive in the United States. And on Saturday, the Trump administration expanded travel restrictions on Iran and is now urging Americans to avoid travel in parts of South Korea and Italy as those respective countries grapple with how to contain the spread of the virus.

“In addition to screening travelers ‘prior to boarding’ from certain designated high-risk countries, or areas within those countries, they will also be screened when they arrive in America,” Trump wrote on Twitter.