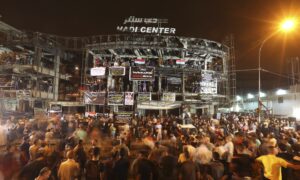 CNN on Friday reported that al-Zawahiri, a 62-year-old Egyptian-born doctor, said in the message that Muslims need to try and prevent Egypt from getting divided in the aftermath of the fall of Morsi, who is associated with the Islamist Muslim Brotherhood.

The message, which clocks in at 14 minutes, was posted on jihadist websites. CNN said that it could not verify if it was really from al-Zawahiri, but if so, it would be the second message that he released in a week.

“The crusaders, the seculars, the Americanized army, (former President Hosni) Mubarak’s thugs and some members of Islamic parties with the support of Gulf money and American plotting, all agreed to topple Mohamed Morsy’s government,” he purportedly said.

The forces behind the recent change in Egypt’s leadership seek a “secular, pro-American president to rule Egypt so they can continue with their plotting — along with the Americans and Zionists — to divide Egypt, just like what happened in Sudan,” the message added.

Earlier in the week, al-Zawahiri posted a message saying that Guantanamo Bay inmates will be freed.

“The [hunger] strike by our brothers at Guantánamo unmasks the true ugly face of America,” Zawahiri said, according to the Guardian.

“We pledge to God that we will spare no effort to free all our prisoners, on top of whom are Omar Abdel Rahman, Aafia Siddiqui, Khaled Sheikh Mohammed, and every oppressed Muslim everywhere,” he continued. The men spoke about are suspected Islamist terrorists, including Mohammed–the mastermind of the Sept. 11 attacks.