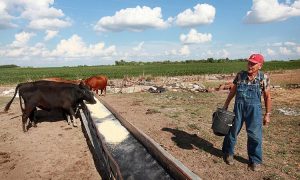 Chinese state media today released information from unidentified sources who revealed a plot currently being undertaken to "grasp and control the world using democracy as a pawn."

Communist Party newspaper, Global Times, also revealed that China was the main focus of the attack, as the aggressor, "turns its spear point on China.”

The startling news also revealed the threat to be part of a larger plot by Western nations to “venomously attack China". The main weapon identified in the international conspiracy is the new Guns n’ Roses album.

The album called, Chinese Democracy has raised questions about the meaning behind the title.

Guns n’ Roses bandleader, Axl Rose, is said to have been plotting his quest for global domination for the past 17 years. He even spoke publicly of his plans for the “album” in 1994, prompting some to comment that it was a “plot cooked up in the open.” [caption id=”attachment_76921″ align=”alignleft” width=”320″ caption=”Guns n