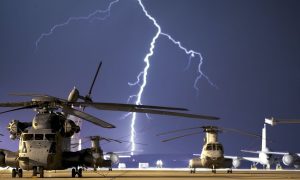 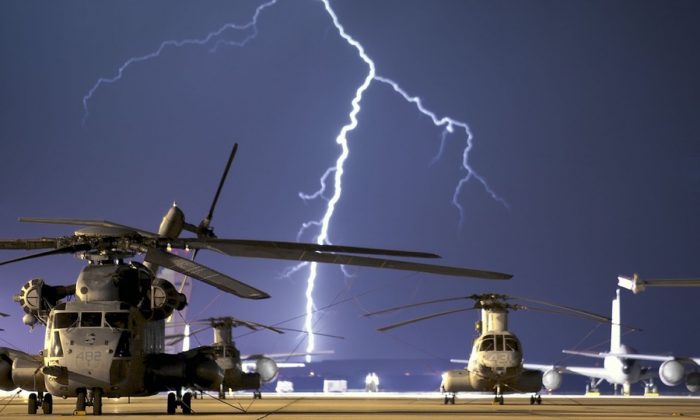 Stock image of lightning on an air base. (Skeeze/Pixabay)
Trending

A Florida man made the video of a lifetime, capturing the moment lightning struck the ocean.

Clint Blevins shot the incredible footage near Daytona Beach, showing the moment a bolt hits the water. Luckily, no one was swimming at the time.

The lightning is seen leaving a vertical streak following the strike.

“It is very possible that a main strike can be followed by 30 or 40 secondary strikes,” says an article in HowStuffWorks. “Depending on the time delay between strikes, we may see what looks like one long-duration main strike, or a main strike followed by other flashes along the path of the main strike.”

According to the National Severe Storms Laboratory, the odds of being hit by lightning in the United States stand at about 1 in 3,000. “Lightning can have 100 million to 1 billion volts, and contains billions of watts,” it says, adding, “Energy from lightning heats the air anywhere from 18,000 degrees Fahrenheit to up to 60,000 degrees Fahrenheit.”

And regarding Daytona Beach, it’s the “lightning capital” of the United States, said the Daytona Beach News-Journal Online, noting that the most lightning-related fatalities occurred there in 2014 and 2015.

Two giraffes were killed by a lightning strike during a storm several weeks ago, Lion County Safari officials confirmed this week.

Officials in the Palm Beach County, Florida, park said that 1-year-old Jioni and 10-year-old Lily were killed by lightning six weeks ago. Testing recently confirmed the development, WPTV reported on June 11, which added that the animals were not related.

This is what’s left of a 45 year old man’s helmet after he was struck by lightning, while riding his motorcycle southbound, on I-95 in Volusia County this afternoon. Unfortunately he did not survive the crash. pic.twitter.com/uFklUPY8r1

“The whole team here was devastated and we’re still in the mourning process weeks later,” said Haley Passeser, a spokesperson for Lion Country Safari, to the station. “There were a lot of tears shed. Some of our keepers had to take some personal time off to process.”

When thunderstorms hit the area weeks ago, officials opened up the animal shelter area in the park, but it is up to the animals themselves to seek shelter or stay outside.

Passeser noted that the severe weather approached the park with little warning.

“We do try to provide them a lot of choice, and in a case such as that when we ourselves are also seeking shelter,” said Passeser. “If they don’t choose to seek shelter, there isn’t a lot we can do to encourage them to.”

And also, a motorcyclist died on June 9 after he was struck by lightning while traveling down Interstate 95 in Volusia County, Florida.