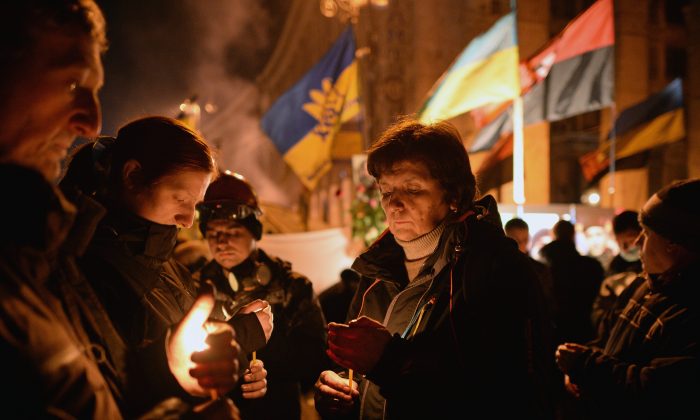 Prayers are held in Kiev, Ukraine, on Feb. 20, 2014, for victims who have died during anti-government protests. (Jeff J. Mitchell/Getty Images)
Crisis in Ukraine

Away From the Front Line, Ukraine Protest Sparked Civic Revolution

It has been a year since civil unrest first started to erupt in Ukraine. And while the country is still riven by turmoil, the movement has left a positive mark. Those involved have discovered a new way to engage in politics and civic life.

The first so-called Euromaidan protests began in Maidan Square in Kiev when former president, Viktor Yanukovych, pulled out of a deal to strengthen Ukraine’s ties with Europe in favour of working more closely with Russia. This move, usually seen as the reason for the very existence of the Euromaidan movement, actually merely acted as a trigger for old grievances. The protesters were united by one main goal – to get rid of a regime so corrupt that its overthrow was seen as the only option left.

In deposing the president, the Euromaidan movement stripped those in power of their stature and gave a voice to people who were usually unheard.

A particularly powerful example of this change came on February 21 2014, when an unknown 26-year-old took to the stage in Maidan square, imploring the crowd to oppose the president’s plan. He was greeted with cheers and applause. The leaders of the established political opposition, who had just declared a truce with the government, stood speechless on the sidelines. Within hours, Yanukovich had fled the city.

Later, ex-prime minister Yulia Tymoshenko came to the square to give her first speech just hours after being freed from prison. The reaction from the crowd made it clear that she was not the leader the people wanted. Indeed, the lukewarm welcome Tymoshenko received may well have put paid to any chances she had of rebuilding her career as a political heavyweight.

The Euromaidan presence, however, has since disappeared from the square. It was inevitable that some of the protesters would return home after the initial goal of overthrowing Yanukovich had been achieved.

An active minority at the forefront of the movement was adamant about staying put. They wanted to make sure that politicians associated with the old government were investigated and that those replacing them would not make the same mistakes.

The outbreak of armed conflict in eastern Ukraine took priority though and many activists left to fight on the front lines, where the threat was greatest. An unfortunate side-effect of protecting the eastern frontier was the weakening of the Maidan movement at the heart of the country.

A New Kind of Politics

It would be easy to claim that the war has cancelled out all of Euromaidan’s achievements and that the outlook for Ukraine is overwhelmingly negative. The national elections in October saw the lowest voter turn-out in the country’s history, while those held more recently in the east have all but confirmed that the present conflict is in a frozen state. All signs point to an exhausted society fighting a losing battle.

On the other hand, while the strictly political side of Euromaidan has disappeared, the movement has left a legacy. It appealed in the first place because of its inclusive and anti-establishment nature. It was a grass-roots movement that did not search for legitimacy through democratic elections.

People of Euromaidan: united and different

So low electoral participation should not be considered as a sign that society at large is not engaged with political life – it is instead a sign that the public still doesn’t trust the political system. Euromaidan is still needed and politics still needs cleaning up – but for the time being there are bigger fish to fry.

The experience of Euromaidan coupled with its legacy, will ensure that the political system will be reformed, whatever the outcome of the current conflict.

A New Kind of Citizenship

In additional to its explicitly political role, Euromaidan became an alternative way to express citizenship – one based on the idea that overthrowing a destructive regime is not just something that could be done but something that should be done. Citizenship was redefined to be more active and involved.

Out of this new definition, a volunteering spirit emerged, particularly in the scramble to help the people forced to migrate after finding themselves in the middle of a war zone. There are currently around 460,000 people confirmed to have been displaced by the conflict inside Ukraine – and the real number is likely to be much higher.

Grassroots groups have emerged to fill the vacuum left by a lack of international support or help from central government. Organisations such as Crimea SOS and Vostok SOS have remained a constant presence since March 2014, helping displaced people to get humanitarian aid, find temporary accommodation, employment and psychological and medical support.

Euromaidan inspired many Ukrainians to act in the public interest. Volunteers treat all displaced people the same way, no matter whether they blame Russia or the new Ukrainian government for their misfortunes. The western Ukrainians who help these volunteers financially and in-kind often remain anonymous, helping victims that come overwhelmingly from the east. So much for a country divided.

Vsevolod Kritskiy is a PhD candidate in international history at the Graduate Institute of International and Development Studies. He does not work for, consult to, own shares in or receive funding from any company or organisation that would benefit from this article, and has no relevant affiliations.