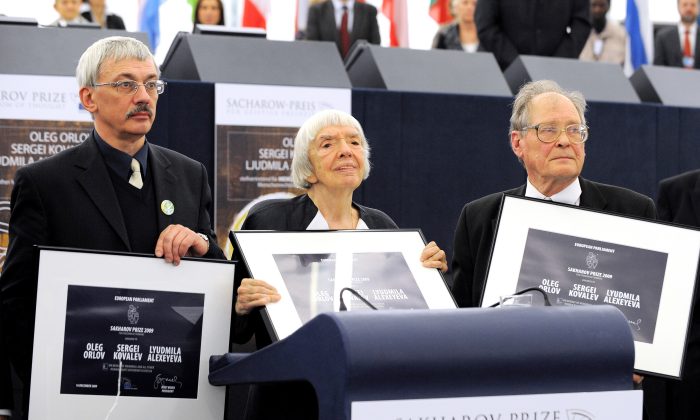 BRUSSELS—One of the most respected Russian human rights organizations “Memorial,” which was founded by Nobel Peace Prize laureate Andrei Sakharov in 1987, is under attack by Russian authorities.

Russia’s Ministry of Justice filed charges with a constitutional court on Sept. 24 seeking to liquidate Memorial, although the exact charges are unknown.

Russia’s Foreign Ministry told foreign press that Memorial had “numerous violations of the Russian Constitution and legislation on activities of non-governmental organizations,” according Moscow-based to RIA Navosti news.

Memorial’s hearing with the Supreme Court is set for Nov. 13.

Willy Fautré, director of Human Rights Without Frontiers, an NGO based in Brussels, says the charges are just an excuse for the Russian authorities to get rid of an outspoken and well-respected opponent.

“We know why this is happening. At the beginning of this year, for example, Memorial released the list of more than 40 political prisoners and of course that disturbs the policies and the media campaign that [Russian President Vladimir] Putin wants to develop to show a nice face of his government and his regime,” he said.

“Memorial” is one of a number of human rights NGOs targeted by Russian authorities since the adoption of the infamous “foreign agent” law in July of 2012.

Under the new law, all NGOs collecting foreign grants and conducting “political activities” must register themselves as “foreign agents” and not civil society organizations. Memorial contested the label, saying it has the connotation of a soviet-era foreign spy and would affect their work in society.

Sergei Kovalev, human rights adviser to former Russian president Boris Yeltsin and one of Memorial’s leaders, says there is nothing political about what the organization does.

“Voicing my opinions is not political activity. It is my right and also my civil obligation. I as a citizen am the source of power in this country, that is written in the constitution. We can voice our opinions about the president, and we don’t have to support him,” he said.

He also explained that many Russian NGOs are partially funded by overseas organizations because any grants in Russia have to be approved by the Kremlin.

“It is not written anywhere but it is a fact of life,” he said.

This year, a number of NGOs, including the prominent Moscow Helsinki Group, did receive government funding. Memorial was not one of them however, so without foreign funding, Kovalev said it would be impossible to survive.

This new attack is targeting the Memorial’s research organization, which has 40 branches around Russia. Earlier this year, its human rights subsidiary was also targeted in a court case to register as a foreign agent.

In a strongly worded-resolution, the Parliament said it urged the Ministry of Justice to withdraw its lawsuit, and “stresses that Memorial plays a crucial role in the development of democratic values and the promotion of human rights in Russia.”

It went on to express concern about the rule of law in Russia and the treatment of civil institutions, “in particular those organizations which work on human rights and democratic freedoms and express criticism of state policies,” the resolution said.

Memorial, which was founded to preserve the memory of victims of communist repression in Russia, was itself the recipient of the Sakharov prize in 2009.