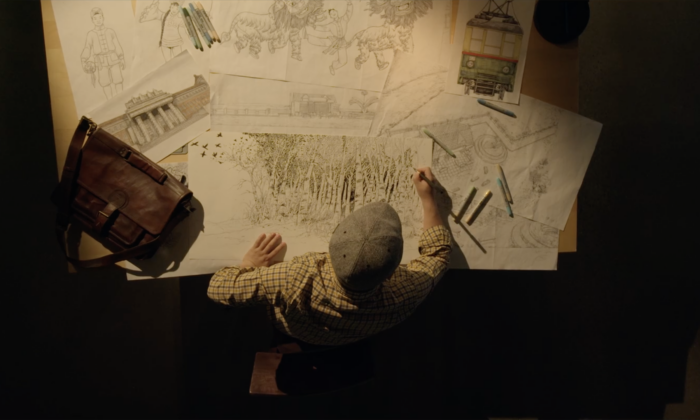 Artist Daxiong in a still of the "Eternal Spring" documentary, which tells the story of a group of Chinese expatriates who brought uncensored news to China and the aftermath. (Courtesy of Lofty Sky Pictures)
Australia

The premiere, hosted by the Melbourne Documentary Film Festival (MDFF), screened to a full house, with the second screening scheduled for Saturday, July 23, already sold out.

The Canadian-made documentary uses a mixture of animation and interviews to tell the true story of a group of people in China who, in their own unique way, stood up to oppression by the Chinese Communist Party (CCP).

To break through the state-sponsored constant broadcasting of propaganda about their spiritual practice, a small group of Falun Gong practitioners in 2002 set out to hijack a state TV signal in the city of Changchun, which translates as “Eternal Spring” in English.

The film is directed by Peabody Award-winning filmmaker Jason Loftus, and the film’s illustrations are created by Daxiong, who is renowned for his work in Star Wars comics and DC’s Justice League.

Loftus, who was present at the premiere, said he wanted to give exposure to a human rights issue in an entertaining and informative way that people can connect with.

“When it comes to human rights issues, if people are just hearing facts about suffering, and this kind of thing, it can be a lot for people to bear,” he told The Epoch Times.

The premiere screened on a most significant date; it was on July 20, 1999, that the CCP launched its widespread persecution campaign against Falun Gong. To commemorate and raise awareness, practitioners globally have held events on or around July 20 every year for the past 23 years. This year, besides holding a parade and rally in Melbourne’s CBD and a candlelight vigil outside the Chinese Consulate, many from the local Melbourne Falun Gong community attended the film’s premiere and took the opportunity to thank the film director for producing the film and exposing the persecution.

Story of Courage Against the Odds

Hijacking a TV station in communist China to counter a false narrative carried risks for the real-life characters involved. Even today, such an act carries grave consequences, such as imprisonment and torture.

Compelled by a desire to inform people of the truth of Falun Gong—amidst a wave of misinformation and disinformation—these characters defied the odds and successfully achieved their mission.

However, their fate post-mission highlights the harsh consequences of countering the CCP’s narrative.

George Mavroyeni, an award-winning video producer and 40-year veteran in the television and corporate industry, was present at the premiere, and shared with The Epoch Times how he thought the Falun Gong practitioners depicted in the film were “very brave.”

“Not just determined, but there comes a time when they see life as going nowhere, and they are actually prepared to give up their lives to actually have their freedom,” Mavroyeni told The Epoch Times.

“We’ve got to tell our government to speak up on behalf of those people who are suppressed [in China], and the problem here [in Australia] is that a lot of people don’t even realise that the Chinese people are suppressed,” Mavroyeni said.

Also in attendance was Olivia Ball, a Melbourne City Council Councillor and chair of the council’s Family and Children’s Advisory Committee.

Ball is also an author with a background in human rights, and has experience in women’s, children’s, refugees’, workers’ and older people’s rights.

“Freedom of religion and belief is fundamental to our modern understanding of human rights, arising as it does from the horrors of the Shoah (Holocaust) during World War II,” she said in an email to The Epoch Times after watching the film on July 23.

“Eternal Spring is a remarkable artistic and technical achievement by Daxiong and Jason Loftus. It is distressing viewing for Falun Gong practitioners especially, but I hope the film will enjoy a wide distribution around the world.

“I congratulate Cinema Nova and Federation Square on hosting the Melbourne Documentary Film Festival. The Festival is also available online and in Warrnambool until 31 July.”

In a post-screening Q&A that was hosted by film critic Peter Krausz from the Melbourne Documentary Film Festival, Loftus said one of the main issues with the 23-year-long persecution is that people develop “compassion fatigue.”

“So people move on to something, but that doesn’t necessarily mean that things have actually changed or gotten better there [in China],” he said.

“If you look at the Uyghurs, and the scores of arrests of Uyghur Muslims in the northwest of China and how they’re detained and in the internment camps there, you see some very similar things in terms of large-scale arrests, detention and the coercion to abandon their beliefs and their traditions.

“The persecution of Falun Gong has been going on for a long time. That doesn’t actually mean the situation has improved, and it’s still very urgent.”

When asked about the practitioners’ courage illustrated in the film, Loftus said he resonated with the idea of a plum blossom.

“[B]ecause the flower actually blooms when it’s still winter. So it conjures this meaning that even in the midst of difficulty and hardship, there’s better times ahead, or there’s still a sense of hope in the midst of that,” he said.

“[F]or me it was the spirit of the people, the subjects that I was seeing, so regardless of what they had gone through, they were still hopeful. And they still felt that, even in the aftermath of all of this, it was worth it.”

“Eternal Spring” was named as a 2022 Finalist by the MDFF Thursday in the following three award categories: Supreme Award, Best Director – International, and Audience Choice.

To watch the trailer or learn more about the movie, please visit the official website of “Eternal Spring.”