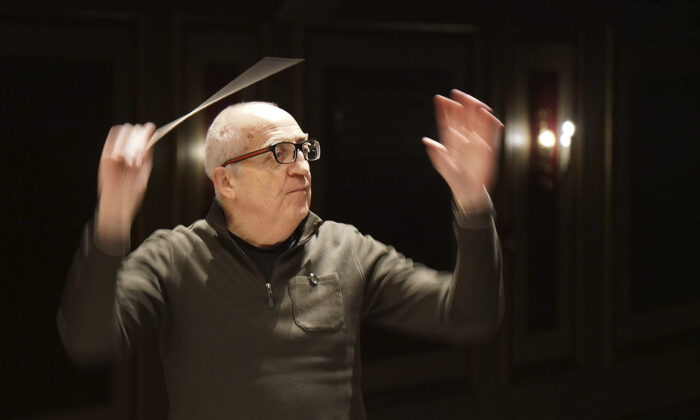 PROVIDENCE, R.I.—Bramwell Tovey, the London-born composer and conductor who’s been the principal conductor and artistic director of the Rhode Island Philharmonic Orchestra since 2018, has died.

Tovey died Tuesday at his Barrington home surrounded by his family, one day after his 69th birthday, the orchestra said in a statement Wednesday.

Tovey was diagnosed with a form of sarcoma in May 2019 and underwent surgery at Boston’s Dana-Farber Cancer Institute in June 2021 that briefly left him cancer-free, the statement said. The cancer returned in January.

“We are all heartbroken,” orchestra Executive Director David Beauchesne said. “Bramwell Tovey was a dear friend and colleague, and a person of uncommon ability, warmth, humor, sincerity, and kindness. The youngest student and most revered guest artist received the same level of his care and attention.”

Tovey, a tuba and piano player who won Grammy and Juno awards, played in Salvation Army bands early in his musical career, according to the orchestra.

He developed a friendship with Leonard Bernstein that started in 1986 when—according to a biography on Tovey’s website—Tovey was a last-minute substitute at the opening night of the London Symphony Orchestra’s Leonard Bernstein Festival, in the presence of the maestro himself.

He is survived by his partner Verena De Neovel, children Ben, Jessica, and Emmeline, and grandchildren.

The Rhode Island Philharmonic Orchestra’s 2022-23 season will be dedicated to Tovey’s memory. Memorial and funeral arrangements were not immediately available.