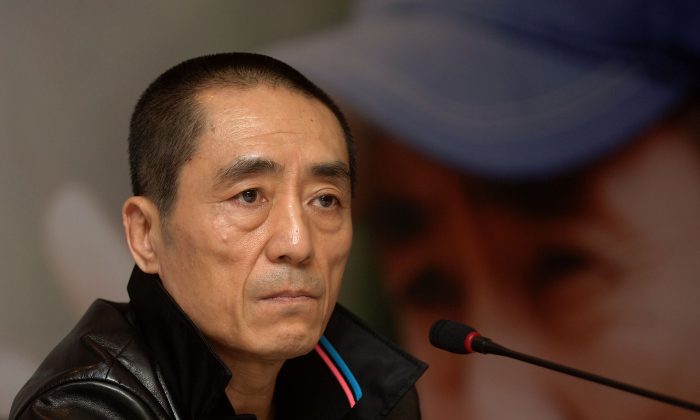 A successful Chinese film director becomes entangled with the propaganda schemes of a brutal dictator. The director enjoys a rich and privileged life, but then loses everything when the dictator’s political opponents charge him with violating the nation’s family-planning laws.

As a film treatment, this might have interested the man often called China’s greatest film director—except that Zhang Yimou is now living out this scenario.

Zhang, like stars in the entertainment business in China and in other countries, had seemed to live on a different plane than mere mortals, one where the ordinary rules don’t seem to apply.

He was famous for having one relationship after another with beautiful actresses, and those liaisons sometimes ended in marriage and sometimes produced children. At last count, Zhang had fathered seven children with four different women.

In China’s film community, Zhang’s behavior would have been considered an indiscretion, but not a violation—if it were commented on at all.

But last week China’s state-run press did begin commenting, claiming to have discovered Internet posts that accuse Zhang of violating China’s strict one-child policy, as though such Internet posts were needed to discover facts that were widely known.

The press in China is like a well-trained guard dog. It barks when it is told to, and not before. Zhang had to realize as soon as his story made it into the press that old connections at the top of the Party were coming back to bite him.

Zhang began his career as someone who seemed to want to keep himself apart from the orthodoxy and the power politics of the Chinese Communist Party.

His first film, Red Sorghum, was immediately hailed as the work of a master, and critics noted that it, and his next two films, were set in pre-communist China. That fact, and the fact that Zhang could not initially get them shown in China, stamped him in the eyes of some in the West as something like a dissident.

That changed with his 2002 film Hero. Billed as martial arts flick, the film, done in Zhang’s sumptuous visual style, made the case for the submission of the individual to the state. When Zhang found his political voice, it was as the servant of totalitarianism.

In 2006, Zhang released Curse of the Golden Flower, part martial-arts-action film and part costume melodrama. Set in the later years of the Tang Dynasty, the film claims to show the rot beneath the beautiful appearance of what is usually considered the high point of China’s civilization.

For the domestic Chinese audience, the apparently inconsequential Curse was a serious foray into propaganda: an attempt to discredit those who hold up China’s traditional culture as superior to that of the Communist Party.

When Zhang was chosen to make promotional films for Beijing’s Olympic bid, no one was surprised. Zhang was then part of China’s cultural establishment, which of course is joined at the hip with the Party.

The Opening Ceremony Zhang produced for the 2008 Olympics dazzled audiences, just as many movie goers were dazzled by Hero. But more astute critics saw in that ceremony a disturbing paean to totalitarianism, a sino version of Leni Riefenstahl.

In an interview with Southern Weekend, Zhang would later say of his opening ceremony, “I often joke with them and say that our human performance is number two in the world. Number one is North Korea. Their performances can be so uniform! This kind of uniformity brings beauty. We Chinese can do it too.”

Zhang’s evocation of the aesthetic pleasures of uniformity had one particular audience member in mind.

Interviewed by RFA, Shanxi-based freelance writer Du Guangda cut right to the chase, “Zhang Yimou can reach high. He belongs to the Jiang faction. His film ‘Hero’ was to back Jiang Zemin, that is, justifying Jiang’s persecution of Falun Gong. Who dares to challenge one with such a strong supporter? Even if they knew, the local family-planning committee could do nothing.”

Jiang Zemin officially was the Chinese regime’s paramount leader from 1993-2002. Behind the scenes, he continued to wield power, with his people holding key leadership positions throughout the rule of his successor, Hu Jintao.

Jiang’s signature initiative was to launch a campaign to eradicate the spiritual practice of Falun Gong. As a recent article in a mainland China magazine made clear—an article whose publication was previously unthinkable, that campaign required the brutal torture and brainwashing of Falun Gong practitioners.

Zhang Yimou may have never meant to be an apologist for torture and organ harvesting, but he was an apologist for Jiang Zemin. An artist who once claimed he didn’t care about politics got his hands not just dirty but bloody.

Now, Zhang Yimou’s number one patron can no longer protect him. Recent news stories show how power is falling away from Jiang by the day.

The 20-year-old poisoning case of the then-college student Zhu Ling, with the former roommate suspected of the poisoning originally escaping investigation because of ties her father had to Jiang Zemin, is now being revisited.

What Zhang’s fate will be remains to be seen. According to China’s state-run media, Zhang Yimou may face a fine of US$26 million. His celebrity and wealth will no doubt protect him from the harsher punishments sometimes meted out by local family-planning officials.

However, as an international award-winning film director and a member of the National Committee of the Chinese People’s Political Consultative Conference, Zhang would have seemed to be untouchable.

But that is precisely the point of targeting him, to send a message: if Zhang Yimou can be brought down, no one is safe.

Zhang can hardly complain if he is now broken on the wheel of the totalitarian state he had glorified. As he told the New York Times in an interview last year, “Foreigners think that because I did the opening ceremony of the Olympics, I have certain privileges. But in fact it’s not like that at all. In front of censorship, everyone is equal.”

As Zhang Yimou leaves the stage, Jiang Zemin knows his turn is one step closer.

Translated by Sophia Fang. Written in English by Stephen Gregory.