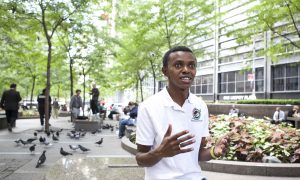 This Is New York: Alex Nsengimana, a Rwandan Genocide Survivor on the Meaning of Life
0
Share Now
TelegramFacebookTweetEmailTellMeWeReddit
Copy Link 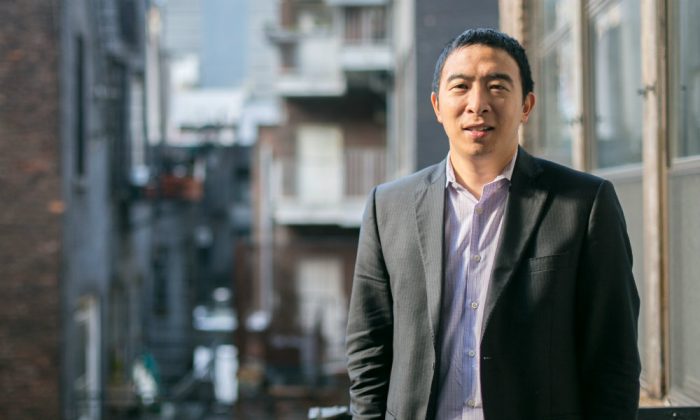 Andrew Yang, CEO of Venture for America, outside his office in Manhattan on Nov. 24, 2014. Venture for America is a fellowship program for recent college graduates to learn how to excel in startup companies and then progress as successful entrepreneurs. (Benjamin Chasteen/Epoch Times)
New York

This Is New York: Andrew Yang, on Avoiding the Golden Handcuffs

NEW YORK—Ex-corporate lawyer and serial entrepreneur Andrew Yang describes rock bottom as scarfing down free bread samples at Cosi and showering at the gym while owing $100,000 in student loans from Columbia Law School.

When his parents questioned him, what he read between the lines was, “Didn’t you used to be smart?”

He had quit work at a law firm to start a business that collapsed in less than two years. It was Yang’s first attempt at entrepreneurship and it was discouraging.

The whole ordeal revealed to Yang, 39, how difficult it was for a college graduate to veer into entrepreneurship. The established tracks limit most grads to Wall Street, Silicon Valley, or academia.

Later, while teaching math to a group of graduates, Yang began observing the brain drain, an economic problem that plagues the country. Top graduates were heading straight into the finance and tech industries in California and New York, leaving their hometowns bereft of their talents.

Recruiters slip through the ranks and snatch up these grads, offering them stable jobs before they’ve even had a chance to consider other options.

Three years ago, Yang founded the nonprofit Venture for America (VFA). He had a vision that VFA would allow young 20-somethings to join and create startups with a support system in place for them to fall back on if the startups didn’t succeed.

Furthermore, instead of sticking to Wall Street and Silicon Valley, these graduates would make their marks in cities like Detroit, Baltimore, and Providence, R.I., where the need for them is greater.

“I’ve had so many opportunities and made so many amazing friends,” said Max Nussenbaum, a 2012 Venture fellow who now works in Detroit as the CEO of Castle, a property management company. He majored in creative writing at Wesleyan College. “[Before Venture] I would have been living in a box on the street before I would have done management consulting.”

Presently, Venture for America has 1,500 grads competing for 150 spots and an annual budget of about $3 million. The company’s reach has extended to 12 cities, including Miami, Las Vegas, and Cleveland.

Earlier this year, Yang published a book, “Smart People Should Build Things,” which details the company’s path and his own discoveries. In the fall, he received a $25,000 award from the Manhattan Institute, a conservative think tank, for his social entrepreneurship.

In leading the next generation of business people, Yang draws on his own 14 years of business experience and quiet beginnings in Westchester County.

A Whole Other Universe

Yang described himself as a shy, sensitive kid growing up, and one of the few Taiwanese in Westchester County, N.Y. As an introvert, he finds it surprising that he’s found himself at the front of the room speaking to crowds.

“You can’t just run a nonprofit and not tell anyone about it,” he said, explaining why he pushes himself to speak up.

Yang skipped kindergarten and graduated from high school early. He attended Phillips Exeter Academy for high school and Brown University for his undergraduate degree, working at a Chinese take-out restaurant over the summers.

The Yang family business is academia: his father, brother, and grandfather have all been professors, and Yang briefly taught at a math prep company.

But he never pursued academia, because he felt it would be self-indulgent to follow in his family’s footsteps. He would only think deep thoughts and write treatises for people like himself, he said.

He wasn’t sure at what age he gained a sense of justice, but he thinks he has always had a desire to improve the world.

Yang discovered that school success did not translate into job satisfaction later on in life, he said. He had followed the well-trodden path, graduating from Brown University and Columbia Law School, and then working for a top law firm for a few months.

“I found the work to be terribly unstimulating,” he said. “And I was like, ‘This is what I get? This is not what I wanted.'”

When he began focusing on what he did want to do, he said he discovered a whole other universe. He quit the firm and started his own company, called Stargiving. People would visit a website, donate some money, and be entered into a lottery for a chance to see a celebrity for a few moments.

After much searching, celebrities signed on, and Yang got funding.

The problem was that the site received little traffic and less than two years after Stargiving’s founding, the dot-com bubble burst and the company went bankrupt.

“It’s not for the faint of heart,” he said of running one’s own company. “But there’s no possibility of achieving if you’re not ready to fail.”

Yang said he was raised with a general message that he should achieve at a high level, but the specifics were left to the institutions—schools, colleges, and the workplaces.

The same is true for other college graduates at top schools, he observed.

“I saw very clearly a lot of very bright, ambitious, young people want to do something significant,” said Yang, but he also saw that they didn’t know exactly how.

He elaborated that an investor wouldn’t give money to someone who was merely good at school, but might consider funding someone who was already running a company and had business experience.

In “Smart People Should Build Things,” Yang brings up Israel’s practice of mandatory military enrollment as a good example of a system of training that gives youth enough experience before they graduate college and start businesses.

He wanted to target top graduates because he believes jobs and investment will follow the work that they deliver.

“That’s the kind of potential I’m chasing,” he said.

In Venture for America’s first year, Yang gave the company a budget of $120,000 and went without salary.

“It’s the price of admission,” he said. “The ante up. If you think it’s such a good opportunity, why isn’t your money the first in?”

In the scope of things, for a company that has spent almost $8 million, his sacrifice wasn’t so great, said Yang.

The real risk he ran, he later realized, was the lives of all the people he was affecting with his plans. He met young graduates and their parents and realized their hopes were weighing on him.

“There’s a lot of humanity involved. You take sudden responsibility for hundreds of young people,” he said, “It’s actually much more of a test of the spirit than I would have guessed.”

And another thing that has changed since he took on Venture for America: he and his wife Evelyn are now the parents of a 2-year-old son.

Nussenbaum said that even before Yang had his son, the fellows were almost like his children.

“Andrew talks a lot about how he wants VFA to change lives,” said Nussenbaum, “And I want to be like, ‘But don’t forget, VFA has already changed lives!'”

He added, “To put me on this path … it’s crazy to imagine how different my life would have been if I hadn’t done it.”

Venture for America will be expanding into five more cities in 2015: Pittsburgh, Minneapolis, Denver, Charlotte, N.C., and Nashville, Tenn.

The categories of people recruited will also grow to include those in their late 20s with working experience or graduate school degrees. The company’s goal is to create 100,000 jobs by 2025.

This Is New York is a regular feature that delves into the life of an inspiring individual in New York City. See all our TINYs here: epochtim.es/TINY