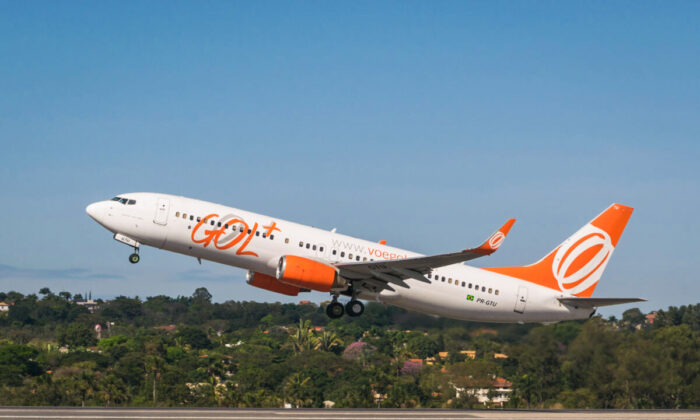 A Gol plane in a file photo. (Dreamstime/TNS)
Regional News

Speakers at an Oct. 26 meeting opposing COVID-19 vaccination mandates in Tulsa, Oklahoma, told aviation and aerospace workers to “hold their ground” and sue employers who fire them for being unvaccinated.

Roughy 100 people attended the meeting at Hope Community Church, where naturopathic physician Dr. Mark Sherwood, Republican state Rep. Wendi Stearman, a local certified public accountant, and an engineer for a local aerospace company were among those who spoke, according to the Tulsa World newspaper.

On Sept. 9, President Joe Biden announced sweeping vaccination measures that are focused on the federal government, the health care sector, and private businesses. Federal workers and federal contractors will be required to get a COVID-19 vaccine. Contractors have until Dec. 8 to get their employees vaccinated and can’t allow their employees to opt out.

The speakers provided those in attendance with guidance regarding the compulsory COVID-19 vaccinations and urged them to stand their ground and seek religious and medical exemptions from the vaccination.

“I submit to you this is a big game of chicken, and it’s waiting on you to blink,” Sherwood said, according to the Tulsa World.

Sherwood noted that “we are not anti-medicine or anti-vaccine” but that “this situation has been rushed.”

Stearman also urged audience members to seek religious or medical exemptions and to sue companies that fired workers, telling them that “the science does not make sense.”

“What we are facing right now is a spiritual battle. We are in a worldwide battle between good and evil,” she said.

Stearman encouraged the audience to “make them fire you all” and to sue employers on the grounds of religious and medical discrimination.

Sherwood and Stearman didn’t immediately respond to a request for additional comment.

James Williams, president of the United Aerospace Workers (UAW) Local 952, said he thinks the “government is overreaching” regarding the mandate.

Both companies have said they’ll comply with the vaccine mandate, according to Tulsa World.

Multiple airlines have mandated vaccines for employees, with United Airlines being the first U.S. carrier to do so, announcing the mandate in August. United Airlines confirmed on Sept. 29 that it was going to terminate 593 of its employees who have chosen to not comply with the company’s vaccine mandate.

American Airlines told workers in an email on Oct. 6 that they have to be fully vaccinated by Nov. 24 or face termination, while Southwest Airlines also announced that it will require all of its 56,000 U.S. employees to be vaccinated against COVID-19.

Hundreds of Boeing Co. employees protested in Washington state earlier this month, after the company told workers that they must be vaccinated.

Roughly 200 workers gathered in protest outside of the company’s Renton and Everett, Washington, locations just days after the planemaker announced the new mandate, dozens of them brandishing signs reading, “coercion is not consent,” and “stop the mandate.”

Delta Air Lines is the only major U.S. carrier that has chosen to not mandate COVID-19 vaccines for all of its employees, although it does require all new U.S. employees to be vaccinated and that all unvaccinated Delta staff be enrolled in its health care plan and pay a $200 monthly surcharge.

Delta Chief Executive Ed Bastian said earlier this month that more than 90 percent of the company’s workforce have been vaccinated against COVID-19 without enforcing Biden’s “divisive” vaccine mandate.

The president has vigorously defended his vaccine mandates to try to end the CCP (Chinese Communist Party) virus pandemic.

“We know there is no other way to beat the pandemic than to get the vast majority of Americans vaccinated,” Biden told reporters at a data center in the Chicago suburb of Elk Grove Village earlier this month, the Associated Press reported.