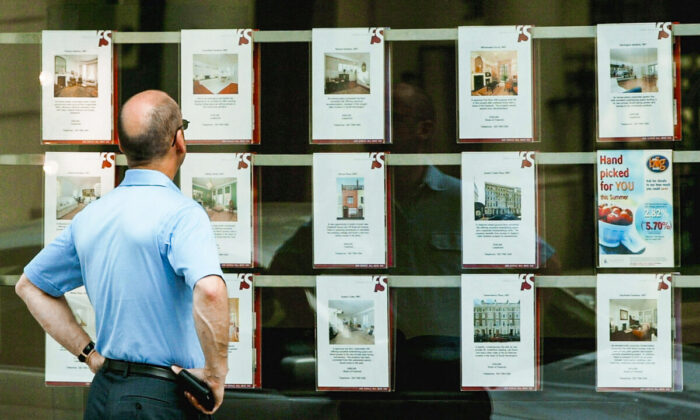 A man looks at properties for sale in an estate agents window in London on July 10, 2003. (Scott Barbour/Getty Images)
UK

The average UK house price hit a record high of £270,027 in October, according to an index.

The average property value grew by 0.9 percent in October—showing an increase of more than £2,500 during the month, Halifax said.

Annual house price inflation accelerated to 8.1%, from 7.4 percent in September.

Halifax said it is the first time the average UK house price has topped £270,000.

Earlier this week, Nationwide said the average UK house price had hit a new record for its index of £250,311.

Wales remains the strongest performer across the UK, with annual house price inflation of 12.9 percent, according to Halifax’s index.

Russell Galley, managing director of Halifax said: “With prices rising for a fourth straight month, the annual rate of inflation now sits at 8.1 percent, its highest level since June.

“One of the key drivers of activity in the housing market over the past 18 months has been the race for space, with buyers seeking larger properties, often further from urban centres.

“Combined with temporary measures such as the cut to stamp duty, this has helped push the average property price up to an all-time high of £270,027.

“With the Bank of England expected to react to building inflation risks by raising rates as soon as next month, and further such rises predicted over the next 12 months, we do expect house buying demand to cool in the months ahead as borrowing costs increase.

“That said, borrowing costs will still be low by historical standards, and raising a deposit is likely to remain the primary obstacle for many. The impact on property prices may also be tempered by the continued limited supply of properties available on the market.”

Nathan Emerson, chief executive of estate and letting agents’ body Propertymark, said: “The balance of housing supply and demand continues to be out of kilter, but as people hunker down for Christmas a seasonal lull within the market is expected.

“However, we know that the desire to move is still there with many UK residents—it’s just the question of when they will choose to make the move.

Mike Scott, chief analyst at estate agency Yopa, said: “The housing market will soon begin its usual slowdown for Christmas, but Yopa expects it to bounce back strongly in January.”

Karen Noye, a mortgage expert at wealth management business Quilter, said that with inflation starting to bite and expectations that the Bank of England base rate will potentially increase soon, “any interest rate rise is almost certainly going to take the wind out of the sails of the market as potential buyers struggle to find low-cost (mortgage) deals”.

Jan Crosby, UK head of infrastructure, building and construction at KPMG, said: “While the complexities of supply chain delays are ongoing, developers are still being hammered by demand for new projects – especially outside of cities.

“This is good news for sellers, with continued supply constraints on new-build homes and insatiable demand.”