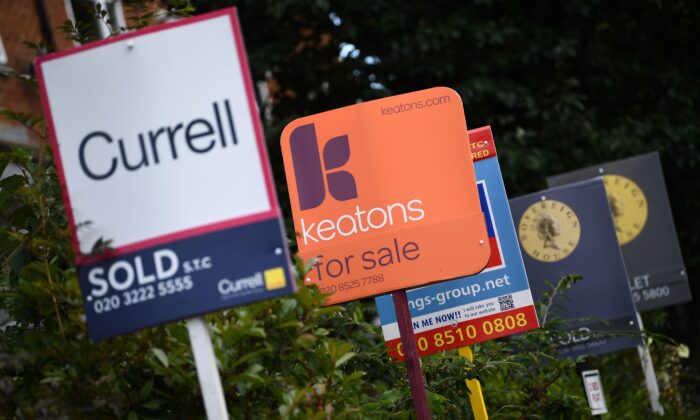 Estate and rental agents' boards are pictured on a residential street in Hackney in East London on August 9, 2019. (Daniel Leal-Olivas/AFP via Getty Images)
UK

The average UK house price rose by nearly £24,000 during 2021, the biggest increase ever recorded in a single year in cash terms, according to an index.

The typical price of a home reached a record high of £254,822 in December, marking a £23,902  increase over the past year, Nationwide Building Society said.

Chief economist Robert Gardner said: “The price of a typical UK home is now at a record high of £254,822, up £23,902 over the year—the largest rise we’ve seen in a single year in cash terms.

“Prices are now 16 percent higher than before the pandemic struck in early 2020.”

Looking at what has been behind the price increases, Mr Gardner said demand for homes has remained strong despite the ending of the stamp duty holiday this year.

He said: “Mortgage approvals for house purchase have continued to run above pre-pandemic levels, despite the surge in activity seen earlier in the year. Indeed, in the first 11 months of 2021 the total number of property transactions was almost 30% higher than over the same period of 2019.

“At the same time, the stock of homes on the market has remained extremely low throughout the year, which has contributed to the robust pace of price growth.”

He continued: “The strength of the market surprised in 2021 and could do so again in the year ahead.

“The market still has significant momentum and shifts in housing preferences as a result of the pandemic could continue to support activity and price growth.”

It said Wales ended the year as the strongest performer, with house prices there up by 15.8% year on year.

Gardner said it is the first time in the history of the regional series (which started in 1973) that Wales has ended the year as the top performer.

He said annual house price growth in Northern Ireland, at 12.1%, was the strongest end to the year it has had since 2007.

Annual house price growth in Scotland was 10.1 percent, in line with the UK generally, Gardner added.

He said: “England saw a slight increase in annual price growth to 9.0 percent, from 8.5 percent in the third quarter…

“The South West was the strongest performing English region, with annual price growth of 11.5 percent, the largest calendar year increase in the region since 2004.”