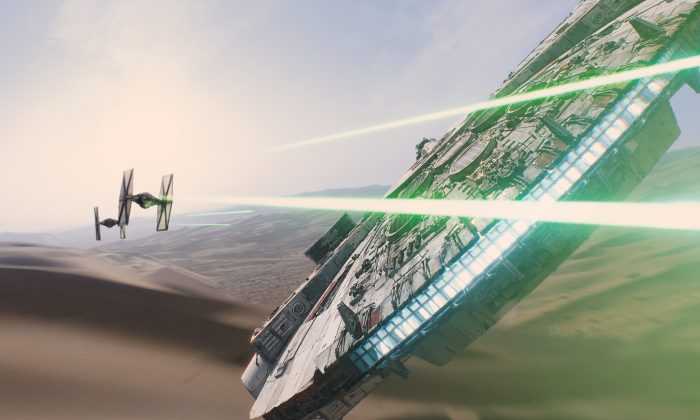 Avengers 2: Next ‘Star Wars VII’ Trailer Could Come with ‘Age of Ultron’

The Star Wars: The Force Awakens trailer could be attached to Avengers: Age of Ultron when it premieres May 1, 2015, according to a report this week.

“We’ve been definitively told that another trailer for Star Wars: The Force Awakens will be attached to Avengers: Age of Ultron when it opens in the Spring. Now, this isn’t some huge revelation. In fact, it’s pretty darn obvious when you think about it. That film, released May 1 in the US, is eight months before the Star Wars opening,” says SlashFilm, which broke the story.

“It’s Disney’s second largest film of the year and the audience crossover is probably massive. Actually, it would probably be bigger news if there wasn’t a new trailer on Avengers: Age of Ultron. But there will be,” adds SlashFilm.

The site then speculates that there could be a “second teaser” before the trailer for the film in May.

“There’s a big Disney movie coming out in three weeks called Into The Woods, but you’d think they’d still be running this trailer at that point. Two months later, though, is the Super Bowl. Disney and that huge event have a long history,” it writes.

Meanwhile, in the realm of trailers, Marvel Studios is now trying to hunt down the person who leaked the Avengers 2 trailer a week before schedule.

“Their own internal investigation has revealed that a user named ‘John Gazelle’ posted a file of the trailer on their Google Drive account on October 22,” wrote SceenCrush.

After the leak, Marvel moved to get its official copy of Avengers 2 online. The company also sent Google a takedown notice for bootlegs.