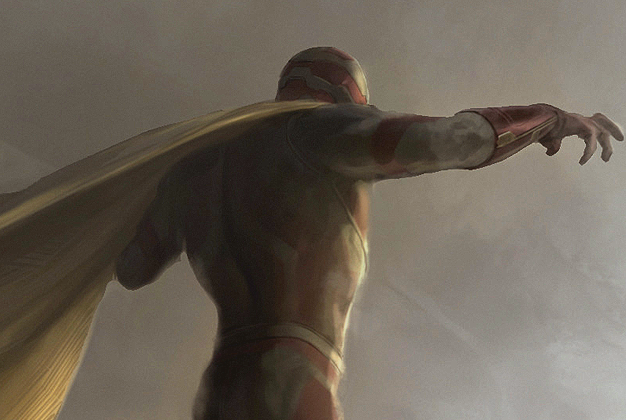 The Vision concept art, part of a package released by Marvel for Comic-Con.
Entertainment

Avengers 2: “Age of Ultron” spoilers keep coming out, and the latest concern a potential female cameo as well as more details about The Vision.

He was asked in a roundtable at Comic-Con about the Avengers attitude about having him around.

“It’s just been, like I said, a really lovely working experience. I think there’s a lot of, initially in the plot, as it were, a lot of distrust, and that has to be navigated by The Vision, and he does it in a quite extraordinarily shocking way. He gains their trust in a real–it will be–it’s a real roof-raiser of a moment. Everybody will flip.”

Bettany was also asked if he’ll miss the sassiness of voicing J.A.R.V.I.S.

“I wouldn’t say I missed it because I don’t think that it entirely went away,” he said.

“You’ll see. And as he is born and becomes more realized, it’s hard to be ironic when you’re — I know what you’re talking about because there’s a sort of irony and knowing with J.A.R.V.I.S., but it’s hard to be — I mean, babies aren’t particularly ironic. But he’s somebody who is learning about the world at quite an exponential rate, and he becomes more sassy as the movie continues.”

Meanwhile, new rumors have come out about a female cameo. Bad Ass Digest, in an article about how Marvel should have a female-led movie, said that it has seen multiple drafts of Age of Ultron, and all feature a cameo by a character the script calls Ms. Marvel (nothing else, including civilian name or basic look, is specified).

“It’s a cameo, so it could change at any time, but the character is planned for the Marvel Cinematic Universe. This is a fact,” the blog reported.