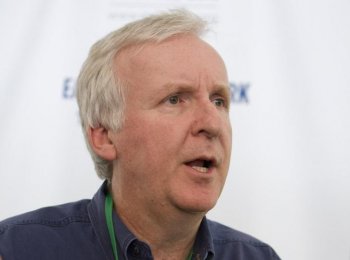 AVATAR: James Cameron, director of 'Avatar' and 'Titanic' discusses environmental issues at the Earth Day 2010 Climate Rally in Washington. His movie 'Avatar' will return to theater on Aug. 27 with over eight minutes of new footage. (Lisa Fan/The Epoch Times)
Entertainment

Avatar, James Cameron’s history-making epic movie, will return to U.S. and Canadian theaters in 3-D on Friday with over eight minutes of footage never shown before, according to the movie’s official website.

Avatar, an Oscar and Golden Globe winning epic, is the highest grossing movie and the top-selling Blu-ray disc of all time. It has earned over $2.7 billion in worldwide box office revenue.

Avatar, set in 2154, tells a story of paraplegic marine Jake Sully’s (Sam Worthington) journey of redemption and discovery on the distant moon Pandora. On the spiritual moon, Sully meets Na’vi tribal princess Neytiri (Zoë Saldana), who he gradually falls in love with. Sully, who starts to connect more with the Na’vi than with the humans, eventually leads a heroic battle that saves the civlization on Pandora.

The new footage in the special edition is scattered throughout the movie. One part shows the death of one of the Na’vi, Pandora’s native humanoids, which was only hinted in the original film.

“We actually see him die,” director Cameron told The Associated Press. “Not like he splats to the ground, but how they gather around him afterward. It's this big emotional scene and it's actually the best [computer graphics] we did in the whole movie."

Since Avatar,’s release last December, 3-D productions have become the new trend. Three-D movies including Alice in Wonderland, Shrek Forever After, and How to Train Your Dragon have all come to theater to promote the 3-D era.

The Avatar special edition will be gradually released worldwide between August and October to countries including Australia on Aug. 26, France on Sept. 1, Philippines on Aug. 27, U.K. on Aug. 27.

After a still from the special edition was posted on Avatar’s Facebook page Thursday evening, over 1,200 users have “liked” the photo and 180 have commented as of 4:30 a.m. EDT.