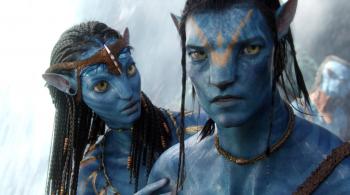 In the new James Cameron directed film 'Avatar', Neytiri (Zo&#235 Saldana) and Jake (Sam Worthington) make final preparations for an epic battle that will decide the fate of an entire world. (WETA)
Entertainment

Stephen Jones
View profile
Follow
biggersmaller
Print
A luminescent, idyllic world populated by peace-loving aliens may have captivated cinema audiences across the world, but for some the 'immersive' experience of watching the film Avatar has threatened to overshadow their own lives.

Hundreds of fans of James Cameron's blockbuster 3-D epic have complained that they feel despair after leaving the cinema that they can never live in a world like the mythical Pandora, in the film.

An online discussion board, titled “Ways to cope with the depression of the dream of Pandora being intangible,” has received more than 2,000 posts from fans beating their breasts over their relatively more pallid life on Earth.

“After I watched Avatar for the first time, I truly felt depressed that I was awake in this world again,” one post reads.

Another says, “It’s so hard, I can’t force myself to think that it’s just a movie, and to get over it, and that living like the Na’vi will never happen.”

On a separate forum, on the Web site Naviblue.com, fans have even considered more extreme action.

“I even contemplated suicide, thinking that if I do it I will be reborn in a world similar to Pandora, and that everything will be the same as in Avatar," one post read.

It has been speculated that the reason behind the widespread depression may have been due to the release of the bright and visually stunning film during the middle of one of Europe's bleakest winters on record.

But U.K. psychiatrist, Dr. Jacqueline Scott, said that it was unlikely that a film could trigger seasonal affective disorder.

"I think that the people who are feeling depressed may have already had a predisposition toward this," says Dr. Scott.

The film is based around the story of how humans wage war on eco-friendly aliens of an idyllic planet called Pandora, for a rare mineral substance called “unobtainium.”

Avatar, which took 14 years to make, has been lauded as a revolution in filmmaking—not least because of its presentation in 3-D.

However, some say that the effect of 3-D cinema on audiences has not been fully accounted for.

In his latest book, “The Age of Absurdity: Why Modern Life Makes it Hard to be Happy,” Michael Foley argues for a reappraisal of the effect of film on our emotional state.

“With Avatar, the technology has become so highly sophisticated that it makes the screen world seem more vivid than reality can ever be,” he told the Times Online.

"What you’re absorbing is so stimulating, and what it offers is so frenetic, giving you a new stimulus every second, that it makes real life feel sluggish, slow, and impossibly dead in comparison.”

In a bid to recapture the same emotions of the film, a group of fans in Florida have announced that they will create a commune inspired by the ecological principles of the Na'vi.

The bizarre fall out from the film has even prompted the eccentric London Mayor Boris Johnson to pen an opinion column in a U.K. newspaper titled 'Stop pining for life on Pandora and come back to planet Earth.'

He predicts that in 10 years’ time the U.K. census will show more adherents of Eywa, the earth goddess of the Na'vi, than there are of Jedi.

"I can't believe that many of these gloomy post-Avatar Westerners, when they really think about it, would want to up sticks to Pandora and take part in Na'vi society, with its obstinate illiteracy, undemocratic adherence to a monarchy based on male primogeniture, and complete absence of restaurants," he said.

"The final irony, of course, is that this entrancing vision of prelapsarian innocence is the product of the most ruthless and sophisticated money-machine the world has ever seen. With a budget of $237 million and with takings already at £1 billion [$1.6 billion], this exquisite capitalist guilt trip represents one of the great triumphs of capitalism."