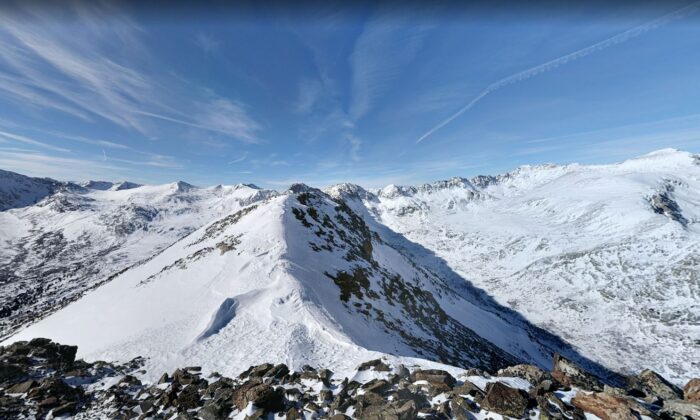 A photo of North Star Mountain in Colorado in November 2017. (Google Maps/Screenshot via The Epoch Times)
US News

ALMA, Colo.—Two people snowshoeing in the mountains of Colorado were killed in an avalanche over the weekend, authorities said.

Their bodies and the body of their dog were found buried near Hoosier Pass in central Colorado by searchers using an avalanche rescue dog, the Colorado Avalanche Information Center said Sunday.

The search started after the snowshoers failed to return from an outing on Saturday.

Using information about their plans from family and friends, searchers found a recent avalanche and a faint track on a flank of North Star Mountain before the dog located the bodies, the center said in its preliminary report on the slide.

The snowshoers were not identified and the avalanche was the second fatal slide this winter in Colorado.

A backcountry skier was killed in an avalanche near Cameron Pass in north-central Colorado on Christmas Eve. The victim’s partner located him with a transceiver and probe pole and pulled him out but he didn’t survive, authorities said.