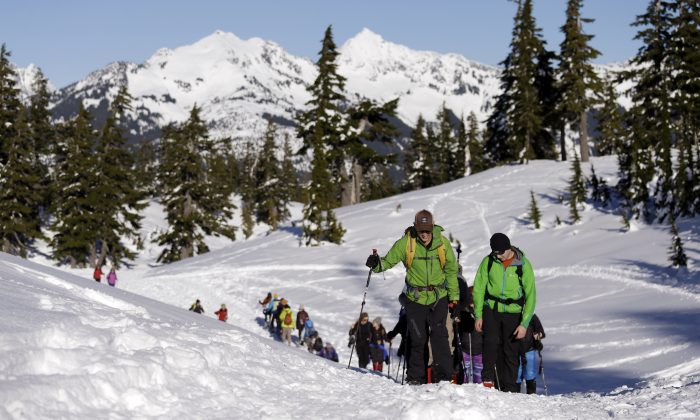 MOUNT BAKER, Wash.—Walker Smith has been skiing in-bounds at resorts since he was young, but lately the Seattle teen has become more interested “in getting tracks where no one else has really gone.”

He knows backcountry travel comes with avalanche risks, he said. So under a brilliant blue sky one Saturday, he and a dozen teens hiked out into the snowy landscape outside the boundaries of Mount Baker ski resort to learn how to identify avalanche terrain and spot warning signs.

“It’s not 100 percent safe in the backcountry so you have to know about all the dangers,” said Smith, 17, a member of the Mountaineers Adventure Club, a Seattle-based teen program that partnered with Northwest Avalanche Center to organize the avalanche awareness field trip.

As more young adults head out of bounds to ski, snowboard or hike in the winter, experts are targeting their message about avalanche safety to an even younger audience. They’re trying to reach kids early — in middle or high school, sometimes even in elementary school — to build their knowledge about snow and avalanches.

“They’re young, they’re impressionable. They don’t have a pattern of bad behavior yet. By spending more time on youth, we feel like we can make a difference in changing behavior,” said Scott Schell, program director of the Northwest Avalanche Center, a Seattle-based non-profit and federal government partnership.

The center, which issues weather forecasts and avalanche warnings, also offers about 200 free or low-cost education classes each winter to church groups, schools, shops and other organizations. About one-third are now geared toward teens or young adults.

“We feel that working with younger people is the way to affect behavior down the line,” since they’re likely to be lifelong users of the outdoors, Schell said. “We tell them that most of the time it’s safe and sometimes it’s not. Learning when it’s safe and when it’s dangerous is one of the key takeaways.”

At least 14 people have been killed in slides so far this season; the three most recent deaths happened Sunday in Washington and Wyoming. This month has been the deadliest January for slides in nearly 20 years, according to the Colorado Avalanche Information Center, the central archive for avalanche accidents in the country. On an average, 27 people die in avalanches across the U.S. each year. The center doesn’t track age of all fatalities, but avalanche deaths typically involve men between 20 and 45, the center said.

After a 2003 avalanche killed three young men in Utah, the Utah Avalanche Center created a free avalanche awareness program for middle and high school students. The hour-long program includes a high-energy video that helps them understand how to have fun in the mountains while avoiding avalanches.

Better gear, more media coverage and rising lift tickets at resorts have made the backcountry more accessible and appealing to a wider range of people.

A lot of the kids may not go into the backcountry, but the idea is that “when someone talks them into getting into the backcountry 15 years from now, they’ll have this knowledge that they’ve stored away,” said Paul Diegel, executive director of the Utah Avalanche Center.

More than 200,000 students in Utah have been exposed to the “Know Before You Go” program over the last decade. And the program has spread to other states.

In Jackson, Wyoming, the American Avalanche Institute, which targeted high schoolers, has expanded its program to middle schools as well. It runs several free avalanche programs for kids 10 to 18, which is funding by the Steve Romeo Memorial Fund.

Lessons are shorter with more hands-on activities; the goal is repetition and learning progresses through the age groups. “We try and send our younger, hipper instructors who are easier to relate to,” said Sarah Carpenter, co-owner and teacher at the American Avalanche Institute.

The message to younger age groups is to stay in bounds and avoid the backcountry, Carpenter said. But with older teens, “our goal is not to preach abstinence. As the kids get older, they’re going to go into the backcountry.”

The goal is to give them good habits and skills to build a foundation, she said. The message: if they duck under a rope or venture out-of-bounds, the conditions are going to be very different.

For the teens, ages 14 to 18, with the Mountaineers Adventure Club, the day began with a review of the avalanche forecast, which said conditions were moderate.

Eric Gullickson, an avalanche instructor with the Northwest Avalanche Center, lead the group as they set off, snow crunching under foot, toward Artist Point on Mount Baker, about 130 miles northeast of Seattle.

As they hiked, Gullickson pointed roller balls on slopes, cornices and other avalanche dangers. He asked the group what the difference is between snow inside ski resorts and out of bounds. The teens chimed in that ski resorts control the snow by grooming it and skiers and boarders are packing down the snow.

“The snow is always changing so you always have to be assessing,” he said. “As you’re walking around, keep an eye on the slopes. In your mind, think: ‘Do I want to go there? What’s a good place to go?'”

Gullickson then used a shovel to dig a snow pit, carving a 6-foot vertical face in the snow to reveal the layers of snowpack. The teens moved closer as Gullickson pointed out the hard layer of snow between two soft layers.

“It’s good to know,” said Rowan Forsythe, 15, of Seattle, afterward. “The more knowledge you can have, it’s another tool.”