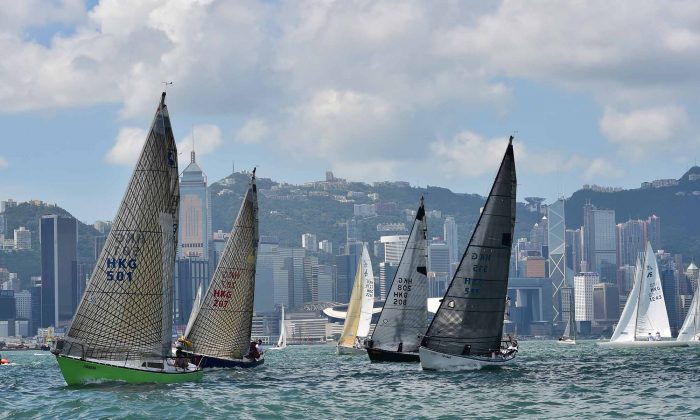 Ruffian Class Boats start at the Autumn Regatta in Victoria Harbour for Race-2 of the 3-Race event on Sunday Sept 14, 2014. The 2-boats on the left are ‘Helios’ and ‘Bandolero’ and on the right is ‘Diablo’ and winner of the Class ‘Victory 9'. (Bill Cox/Epoch Times)
Hong Kong

HONG KONG—The Royal Hong Kong Yacht Club Autumn Regatta which took place on Saturday and Sunday Sept 13 and 14 heralds the beginning of a new Yacht Racing Season for the Club with many activities planned over the coming months.

The Autumn Regatta comprises three races over the two-day event, one on Saturday and two on Sunday. It is open to all classes of yachts: Big Boats Class 1 and 2, Dragon, Etchells, Impala, F15, J80, Pandora, Ruffian and Sports Boats. A total of 91 boats took part.

The races took place within the confines of Victoria Harbour.

Dragon
Many Dragon racers were away at the Kansai Interport Event in Japan so only six Dragon boats were on the water. “Zephyr” came first with 5-points, “Eaux Vives” was second on 6-points and “Wudi” finished 3rd on 12-points.

Etchells
In the Etchells Class 18 boats took part and starting together with the Dragons produced an impressive picture. Winner of the Regatta was “Jezebel” with a 1st, 2nd and 3rd finish (6) followed by “No Name” (10) and “Wanchai Belle” (12). The Regatta winning boats finished in the top 6-places in all races but two other boats had individual race successes: “RX2” won Race-2 and “Quest” won Race-3.

F15
In the F15 Class, “Tomfoolery” had 2-wins and a second place to secure a well-deserved Regatta win with 4-points, “Puff’n Stuff” was second on 9-points and “Kerfuffle” came 3rd on 11-points.

Impala
“Taxi” won the Impala Class with 7 points, “Boss Hogg” was 2nd on 12-points and “Rainbow Chaser” was 3rd with 13-points.

J80
In the J80 Class, “Footloose” showed the other boats the way home, winning all three races. “Lila” came second with 9-points and “Figure of Eight” collected 3rd prize with 13-points.

Pandora and Ruffian
Along with the Impalas, Pandora and Ruffian boats are arguably the prettiest boats that take part. Lovely colours to the boat hulls and in the sails they add much to the overall feeling of the competition.

Sports Boats
As with Dragons a number of regular Sports Boat racers did not take part in the Regatta. With only six competitors “R2B2” topped the winners rostrum winning all three races, “Black Magic” came second on 6-points and “Tornado” came 3rd on 11-points.

Next Race:
This coming Sunday Sept 21 is the Hong Kong “Bart’s Bash” a new sailing race being run by sailing clubs all around the world on behalf of the Andrew Simpson Sailing Foundation, the charity named after Andrew Simpson, who tragically died in 2013 in a training accident in San Francisco bay while preparing for the America’s Cup.